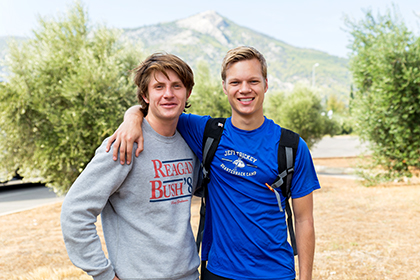 During this semester’s trip to Greece, UD’s Romers toured the ruins of one of history’s most famous military engagements — the Battle of Marathon — dating back to 490 B.C. The trip marked the first visit to Marathon in decades for the Rome Program. “Our visit there was long overdue,” said Peter Hatlie, vice president, dean, director, and professor of classics on the Rome campus. “After all, Marathon is one of the most powerful and important sites of historical memory on the planet.”

Under Hatlie’s instruction, students recited and re-enacted passages from Elizabeth Barrett Browning’s retelling narrative poem of the Battle of Marathon, while also viewing the ancient burial tomb where 192 fallen Athenians were cremated and buried following the battle.

The Athenians’ underdog victory and subsequent “victory lap” from the battlefield has been a source of fame for Marathon through the ages. As the legend goes, the messenger Pheidippides ran nearly 26 miles from Marathon to the Greek capital, Athens, after 10,000 Athenian warriors, outnumbered nearly four to one, staved off the first invasion of the Persian army. After Pheidippides arrived in Athens to announce the news of victory, he collapsed in exhaustion, dying shortly thereafter from fatigue.

“Sorry to spoil the party, but whether we like it or not, the story of the Marathon Run is dubious in part or in whole,” said Hatlie. “Earlier in the same summer of 490 B.C., Pheidippides had run from Athens to Sparta and back, some 150 miles. So we can pretty much exclude the fact that completing the Marathon Run would have exhausted him to death.”

Centuries later, in 1896, the Battle of Marathon inspired the creation of the first long-distance Marathon competition at the inaugural modern Olympic Games in Rome. “Two students actually attempted the Marathon Run, and one made it,” said Hatlie of sophomore Romers John James, BA ’20, and Adam Jace, BA ’20, as the pair traversed over the same footsteps as the messenger Pheidippides.

For those who've already traced the vestiges of Western civilization, what are some of your favorite stories of ancient Rome? Share your favorites on UD’s Facebook and Twitter accounts.