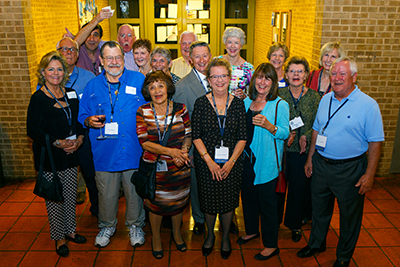 During their freshman year, a mere nine miles from the University of Dallas campus, President John F. Kennedy was shot in Dealey Plaza on Nov. 22, 1963. The children of World War II veterans and women who took to factories, stores and offices to keep the country going while the men were gone, the Class of 1967, members of the first wave of “Baby Boomers,” came of age in a time of particular tumultuousness and change. As they saw classmates off to Vietnam, braced themselves for nuclear invasion and watched Neil Armstrong walk on the moon, they studied with UD’s own legends, including Donald and Louise Cowan, Eugene Curtsinger, Scott Dupree, Judy Kelly, Willmoore Kendall, Sister Clodovia Lockett, Father Ralph March, Sybil and Lyle Novinski, June Welch and Fritz Wilhelmsen, among others.

This class had barely settled into the residence halls on their barren windswept hill in Irving when Kennedy was assassinated. This event had a significant impact on all Americans and certainly on UD’s Class of 1967. Kennedy’s famous words, “Ask not what America will do for you, but what together we can do for the freedom of man,” were imprinted on the memories of these freshmen, influencing the development of their characters and philanthropic spirits.

Kennedy’s challenge, combined with the intellectual skills and inquiring minds nurtured at UD, empowered the members of the Class of 1967 to serve with distinction in all types of vocations. Whether it was running a Fortune 500 company, assisting mentally disabled children, heading a federal agency, holding elective office, raising a family, or volunteering in their communities, this class has embodied the ideals of the university — to pursue truth, act for the common good and recognize the importance of faith and works.

In 2007, the Class of 1967 gathered for its 40th class reunion, where they realized that several friends had already passed away. In considering how best to honor these friends and the formations they had all received at UD, the remaining class members decided that it was important to help new generations gain the benefits of a University of Dallas education — an education that had proved so very valuable to their own class and generation. Penni McTaggart Christman, Bob Fields, Estelle Tovar Lara, Colleen Eastman Rickert, Sharon Gallagher Robinette and Jack Tatom, all BA ’67, worked with the university to establish an endowed scholarship.

As an early request for financial support for the scholarship explained, “While each individual class member’s contribution may be small, the combined actions of the classmates made a significant positive impact on society. Many of the contributions made by members of the class have been recognized in their own communities and professional organizations. While they may have been honored other places, it is only right and fitting that our classmates’ contributions should be recognized at the university.”

To this end, the Class of 1967 Memorial Scholarship was established. Once it reaches $50,000, this scholarship will benefit students seeking an outstanding liberal arts education but struggling with a sudden urgent and critical financial event.

“Life happens to everyone at one time or another. These ‘happenings’ are difficult when faced by an adult. They can be devastating for a college student,” said Jo Ann Gasper, BA ’67. “This scholarship will make the difference in students’ lives.”

Anyone can contribute to this scholarship, which is designed to provide a lifeline when a student is faced with sudden, extreme financial hardship; it is currently $7, 367 short of the $50,000 needed to be fully funded. Contributions can be made here; simply check “Other” and designate your gift to the Class of 1967 Memorial Scholarship.

Also note that if you are at least 70.5 years of age, contributions from your individual retirement account can count toward your Required Minimum Distribution (RMD). See here for further information on using RMDs for planned giving.