“Among infants, respiratory syncytial virus (RSV) causes an estimated 200,000 deaths and three million hospitalizations, making it one of the leading causes of childhood morbidity and mortality,” says Phillip Wozniak, reciting his Fulbright grant proposal. “Both the size of the at-risk population and the prevalence of the disease make RSV one of the greatest burdens on child health resources around the world each year.”

Today, only one licensed treatment for RSV exists, explains Wozniak, which comes at too steep of price to patients. Conducting his Fulbright preclinical research alongside one of the industry’s leading pioneers in immunology and biotechnology, Maria Angeles Muñoz-Fernández, Wozniak hopes to lay the groundwork for developing a low-cost nebulized treatment option through the use of medical nanotechnology.

“My mentor at Children’s Medical Center, Pablo Sanchez, helped me develop a research proposal that had the backing and support of a known leader in the field,” says Wozniak, between returning from the Pediatric Academic Societies annual meeting in California to his departure for Madrid, Spain, where he will begin his research.

In the spring of his freshman year at UD, on the referral of fellow alumnus Tommy Heyne, BA ’05, Wozniak received an unpaid clinical research assistantship to aid pediatric neonatal-perinatal specialist Pablo J. Sanchez, MD, in his clinical research at the University of Texas Southwestern Medical Center at Dallas. Wozniak obtained access to UT Southwestern with his new credentials, and the neonatal intensive care units (NICU) at both its teaching partner hospitals — Parkland Memorial Hospital and Children’s Medical Center.

His first research project: Wozniak assisted Sanchez in studying the overuse of antibiotics in preterm infants for three years. After recording and discovering an alarming usage in the NICU during a 14-month period, Wozniak and Sanchez aimed to inform antibiotic stewardship in order to lessen the error by identifying scenarios where antibiotics can be reduced.

Over prescribing antibiotics wipes out the good bacteria, explains Wozniak, “which in turn clears the way for antibiotic-resistant bacteria” and allows for this growth in “superbugs.”

In 2015, Wozniak relocated with his mentors to Nationwide Children’s Hospital and Ohio State University, where he began studying respiratory viruses, and more specifically, RSV. His past research conducted at UT Southwestern continues to inform his research at Nationwide Children’s and Ohio State. “Antibiotics are often prescribed unnecessarily to children with respiratory viruses,” says Wozniak. “Because the symptoms of a respiratory virus can look very similar to a bacterial sinus infection, my work still involves some monitoring of antibiotic usage.”

Wozniak hopes his preclinical research will add to further discovery and understanding. “I am excited to participate in timely research that could help the medical community's understanding of RSV,” says Wozniak.

“I wouldn’t be where I am without my mentors, and even more fundamental, I wouldn’t be here at all had it not been for my UD education,” says Wozniak. “UD’s Core curriculum taught me crucial critical thinking skills that have been invaluable in my research.”

Back To Her Roots 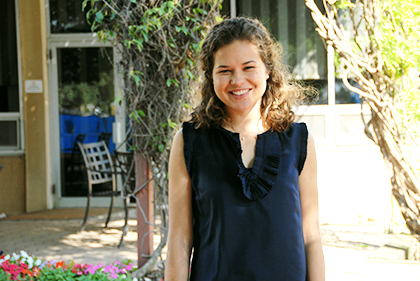 More than a million refugees have come to call Germany their home over the past few years, fleeing from war-ridden countries in Africa and the Middle East. Starting in September, alumna Emily Collins will begin teaching English to local students at a secondary school in the town of Andernach for 12 hours a week, as one of only 140 Fulbright teaching assistants to be stationed in Germany for the next 10 months.

“It’s a wonderful opportunity,” says Collins, who decided to pair her interest in German with a double major in English and economics. “I always hoped that I would find a way to go back to Germany.”

After returning from her study abroad semester in Rome, Collins taught German to third graders at Holy Family of Nazareth in Irving as part of the requirements for her German concentration.

Having lived in Germany for a period as a child while her father served in the U.S. Army, a concentration in German only seemed fitting to Collins. In her foreign language class, she recalls understanding her professors on the first day, and speaking German in class for the first time since she was nine years old: “I remembered how to say certain phrases — I knew how to count, I knew letters and numbers."

“‘You can do that, you can study abroad, you can speak German!” said Associate Professor of Philosophy Christopher Mirus, recalls Collins, encouraging her to apply for the same Fulbright. The start of her senior year, Collins eagerly applied for the next Fulbright in Germany the following year.

“I can’t wait to learn how to cook German dishes,” says Collins, who also intends on gathering traditional German recipes, in order to compile her own German-American cookbook to remember her year abroad. Collins also wishes to expand her knowledge of the culture by touring local museums and reading German literature in her spare time.

A last minute choice the summer before her freshman year, Collins knew UD would provide a well-rounded education, allowing her to forge new pathways in life. “I can honestly say, I have never regretted my decision to attend UD,” adds Collins.

Learn of UD’s latest Fulbright Fellows to study and work abroad in the globalized world.