Among the Nation’s Best 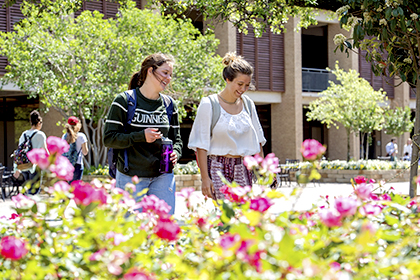 Forbes and MONEY magazine have included the University of Dallas, once again, in their annual rankings of America’s most valuable and affordable colleges and universities. Both rankings reward UD for being one of the nation’s top higher education institutions.

Among the top 300 colleges and universities deemed “worth the investment” by Forbes, UD ranked in the top 12 percent nationwide and as the third Best Value of all private institutions in North Texas. Forbes consistently ranks UD on its annual list of America’s Best Value Colleges, which identifies schools that deliver the best deal on tuition based on cost, quality, graduate earnings, student debt and alumni success.

MONEY declared UD “one of the nation’s top-performing colleges” in its annual ranking of the Best Colleges for Your Money, as well as one of the Best Colleges in the South. MONEY selects more than 700 of the nation’s best-performing colleges, analyzing the educational quality, affordability and alumni success of more than 2,400 institutions across the country.

“It’s an honor to once again be identified as one of the country’s top universities,” said Executive Vice President for Enrollment and Student Services John Plotts. “These best value and top-performing rankings acknowledge our continued efforts to provide a quality private education that is equally accessible and affordable.”

Learn more about the University of Dallas’ awards and distinctions.