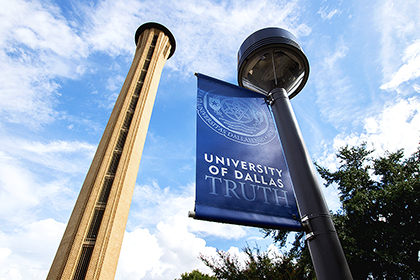 The University of Dallas is pleased to announce that the following faculty members have received tenure or promotion in rank for the 2017-18 academic year. The Rank and Tenure Committee recommended these faculty during the end of the spring 2017 semester for their continued support and enhancement of academic excellence and student success.

“University of Dallas faculty serve as the backbone of the institution, teaching a necessary academic foundation that will prepare their students for future success,” said Associate Professor of Theology and Associate Provost John Norris. “On behalf of the university community, congratulations to the newest promoted and tenured faculty.”

Tenure and Promotion to Associate Professor:

Currently serving as chair of the Education Department, Janette Boazman first joined UD in 2011 as assistant professor of education. Boazman received her master’s in educational psychology from the University of North Texas, where, in 2010, she also earned her doctorate in curriculum and instruction. Her field of expertise is in personal well-being, especially for gifted and talented students.​

Jenny Gu began teaching at UD shortly after receiving her doctorate in finance from the University of Arkansas at Fayetteville in 2011. She teaches managerial finance, investments and portfolio management in the Satish & Yasmin Gupta College of Business. Upon its inception in 2013, Gu began serving as the faculty adviser for the university’s new Student Investment Fund.

In 2012, Richard Miller received UD's King/Haggar Scholar Award for professional development, and in 2015, he was awarded the Haggerty Teaching Excellence Award. Miller began teaching his first graduate course in the university’s college of business after completing his doctorate in operations management and business statistics at Cleveland State University in 2010.

Before coming to UD in 2011, Aida Ramos taught economics at West Texas A&M University. She received her doctorate from Notre Dame University and specializes in the history of economic thought and economic development; in addition to teaching economics at UD, she is researching and writing a conference paper and article on the Dublin Society for Improvement.

Associate Professor of English Dave Davies earned his B.A. (philosophy and history) and master’s (classics) from the University of Rochester. He attended the State University of New York, Buffalo, where he earned his doctorate in classics. Earlier this year, Davies received UD's 2017 King/Haggar Scholar Award. ​He is the recent author of ​”Milton's Socratic Rationalism​: ​The Conversations of Adam and Eve in Paradise Lost.”

Professor of Painting Kim Owens received her M.F.A. in art from Towson University near Baltimore, Maryland, and her B.F.A. in painting and drawing from the San Francisco Art Institute in California. Owens is a well-respected painter, who is represented locally by the Holly Johnson Gallery in Dallas. Her work is in the permanent collection of the Crystal Bridges Museum of American Art in Arkansas. She is also the designer of the Las Colinas Urban Center Dallas Area Rapid Transit (DART) station.