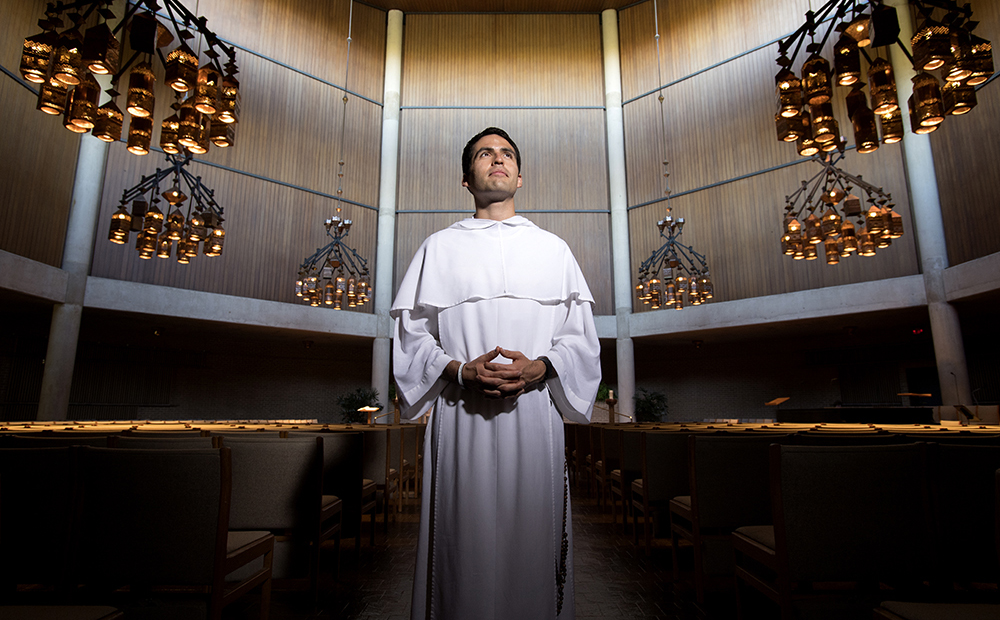 “I’m honored to be able to pass on what I’ve learned spiritually, and to be a part of the UD community, once again, as the new campus chaplain.”

Shortly after his consecration to the ordained priesthood in June, Father Thomas More Barba, O.P., BA ’09 ’10, began serving as UD’s newest campus chaplain, where more than 75 percent of the student body identify as Catholic, as well as rector of the Church of the Incarnation. “I’m probably as new as they come to ordination,” said Fr. Thomas More, who formally began his formation into the Dominican brotherhood after graduating from UD in 2010.

Through his new role, Fr. Thomas More wishes to foster a renewed engagement with the students on campus, in hopes of strengthening the university’s longstanding sacramental identity and presence.

“I don’t want to be tied down to my desk or office,” said Fr. Barba. “I want the students to know that I’m present and available for them —  walking around campus, hearing confession, coordinating Mass, engaging in lectures and regularly visiting the Capp Bar.”

As a young child, Fr. Thomas More attended Mass nearly every Sunday with his parents and two younger brothers at St. Patrick’s Cathedral in El Paso, Texas. “I have a deep and abiding love for the Mass,” said Fr. Barba, who largely credits his family for his love of faith. “I knew I wanted to be a priest from a very young age, and my devotion only grew over the years.”

Fr. Barba was around 10 years old, in fact, when he began to subtly recognize his own calling to
priesthood. For a class assignment in Catholic grade school, he wrote an essay on his favorite childhood role models — Pope John Paul II and his grandfather after whom he’s named, Rodolfo “Rudy” Jose Barba. “These men were my heroes,” said Fr. Thomas More. “I loved reading about the heroic life of Pope John Paul II as he witnessed the Catholic faith. My fictional hero was Spider-Man, though, because he often suffered even when doing the right thing.”

In high school, Fr. Thomas More observed his mentors to discover his second passion — teaching. Then, his junior year, he visited UD. “When I came to campus for the first time during Odyssey Days, I saw the academic rigor and spiritual nature of the university firsthand,” said Fr. Thomas More. “I realized I wasn’t yet mature enough to enter into the seminary to begin my priesthood. I wanted to experience UD’s liberal arts curriculum while also deepening my study of theology and philosophy.”

After graduating high school in 2004, Fr. Thomas More began his studies at UD with a focus on strengthening his own spiritual insight and academic knowledge. He decided a double major in theology and philosophy was only fitting.

“I wanted to study both disciplines, because theology and philosophy both involve so much with being a priest,” he said. “I saw the good and harm that teachers can have on their students, which is why I hoped to help bring people closer to God as both a priest and teacher. My studies really helped prepare me for life as a Dominican friar.”

The spiritual presence and academic rigor of UD only further inspired Fr. Thomas More’s vocation to the priesthood. As a student worker in Campus Ministry, Fr. Thomas More interned under Father Philip Neri Powell, O.P., of the Dominican Priory of St. Albert the Great, and saw the importance of a religious community.

While completing his philosophy thesis senior year, Fr. Thomas More recalls locking himself in the back
supply closet of the Office of Campus Ministry. “Admittedly, this wasn’t the best place to get my homework done, but it worked,”  he said.

“Campus Ministry was a place that wasn’t my dorm room where I could just relax,” said Fr. Thomas More, who credits both Denise Phillips (recently retired Director of Campus Ministry) and Fr. Powell with deepening his prayer life and helping him navigate his spiritual pathway to the Dominican Order.

“I was immediately drawn into Dominican spirituality, which sees study not only as a form of prayer, but as a critical way to bring people closer to God,” said Fr. Thomas More. “As I became more mature and self-aware, I realized my calling to Dominican life. I want to help students integrate the beauty of our faith with their lives.”

“UD has given me so much,” said Fr. Thomas More, who took his religious name in honor of St. Thomas More for his joy, integrity, dedication to the preservation of religious freedom, love of family, devotion to the church, prayer life and belief in a liberal arts education. “I’m honored to be able to pass on what I’ve learned spiritually, and to be a part of the UD community, once again, as the new campus chaplain.”