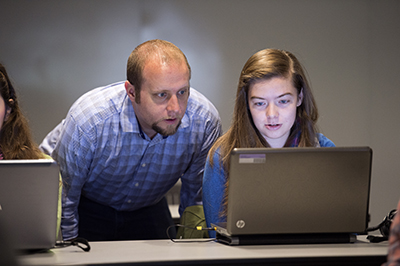 A beloved member of the University of Dallas community, Robert (Rob) Yale, Ph.D., assistant professor of marketing and director of the business practicum program, passed away on April 25, 2017, after a 13-month battle with cancer. He is survived by his wife, Melissa, and their two children, Matthew (4) and Raegann (2).

“Dr. Yale was an accomplished professor, scholar, colleague, husband and dad who was dedicated in all of his work. As a professor, he engaged students inside and outside the classroom with an incredible joy and enthusiasm that continued and did not waiver throughout his difficult cancer treatments,” said Gupta College of Business Dean Brett J. L. Landry.

Yale was beloved by his students. In 2017, he was a nominee for the Piper Professor Award,  given annually by the Minnie Stevens Piper Foundation to 10 educators in the state of Texas in recognition of their superior teaching at the college level. In 2014, he was named “Most Interesting Professor at UD” by the Student Programming @ University of Dallas (SPUD) Academic Committee.

“Dr. Yale has been such an important professor, friend and mentor to me ever since my freshman year at the University of Dallas. He helped me grow into the person I am today. Whether it was his enthusiasm for teaching, sense of humor, love for family, or dedication and service to his students, I have always looked up to Dr. Yale as an example,” said Rachel Sullivan, BA ’17.

Yale’s commitment to his students was marked by his enthusiasm in the classroom. As a professor, Yale had a gift for making learning fun for his students. He was widely known at UD for teaching students presentation skills through his hit YouTube video, “Sensei Rob's Five Rules of Presentational Speaking.”

Over the last 13 months, Yale openly chronicled his battle with stomach cancer through his blog. For all who knew Yale, his life was hallmarked by his enduring faith.

“He demonstrated and taught all of us what faith looks like in a tremendous crisis. A faith that trusted in a loving God despite the cruel disease that took him from all of us. A faith that he documented and demonstrated not only in his cancer blog, but in the actions of his life,” said Landry.

Yale was also an accomplished researcher with ongoing active research, but his teaching and research didn’t stop with the students. Yale worked with faculty and staff on presentation reviews and conducted faculty workshops with a zeal for everyone to improve.

“Dr. Yale was an outstanding professor and friend, and he was a devoted Christian. I was amazed at his ability to keep such a positive outlook and continue to give so much of himself to his students during the past year. Rob will be missed,” said Greg Bell, associate dean of faculty affairs.

“In so many ways, he exemplified what it is to be a professor in the Gupta College of Business and the mission of developing principled and moral leaders. Indeed we all have been blessed by having Dr. Yale as a member of our university family, and he will be deeply missed,” said Landry.

The funeral service will be Saturday, April 29, at 2 p.m. at Northwest Bible Church, 8505 Douglas Ave, Dallas, Texas 75225. Directions to the church may be found here.

In lieu of flowers, the family has requested that donations be made to a fund set up for Yale’s children. Information is forthcoming on how to donate to the fund.