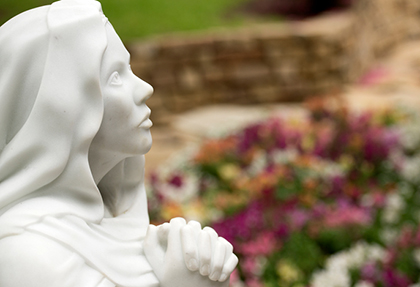 As Houston and other Texas coastal areas endured catastrophic flooding caused by Hurricane Harvey, the University of Dallas community rallied in support of the victims. Not only did those in Irving do their part, but this semester’s Romers, who are just beginning their overseas journey, contributed their time and efforts as well.

In Irving, the Office of Student Activities created a prayer banner signed by students and mailed it to the University of St. Thomas in Houston. Six hundred and sixty seven members of the UD community earned more than $1,500 in donations at the “Texas Forever” TGIT (Thank Goodness It’s Thursday) on Thursday, Aug. 31; the following day, beginning in the early morning and lasting well into the afternoon, groups of students, faculty and staff volunteered with the Dallas-based nonprofit Trusted Worlds.

“I am so proud of the generosity and goodwill of our UD community,” said Catherine Duplant, director of student activities and recreational services. “Thank you to everyone who has helped support southeastern Texas in this time of need. As my family and friends are all down in Beaumont, I'm so appreciative of how UD has responded to this crisis.”

Additionally, all of UD’s athletics teams joined the nationwide relief effort, gathering unused shirts, clothing items and donations for the Lively Pointe Center in Irving, where UD alumna and Athletics Hall of Famer Patty Danko, BA ’90, currently works as the recreation center supervisor. The center was converted into a shelter for hurricane evacuees.

Meanwhile in Rome, on the Eugene Constantin Campus, fall 2017 Romers hosted a chili cook-off benefit to support South Texas Catholic Charities, specifically branches located in the Galveston area, which many UD alumni and families of current and former students call home. UD Rome faculty and staff prepared and sold the chili; Affiliate Assistant Professor of Philosophy Philip Gonzales’ recipe was easily the most popular. Altogether, they raised a total of $650 for the evening.

“Our Rome community gave strong and open-hearted support to this fundraiser, as we should have,” noted Peter Hatlie, vice president, dean and director of the Rome Campus. “Plans are now underway to help victims of the Mexico and Puerto Rico tragedies as well.”