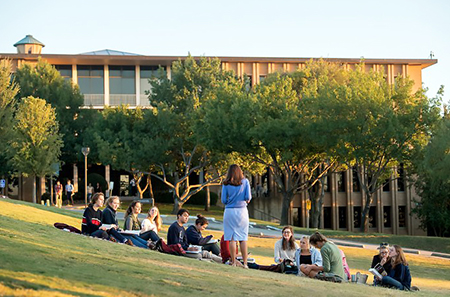 The University of Dallas has been recognized in the 2017-18 Colleges of Distinction Guidebook for the eighth consecutive year among nearly 400 of America’s best liberal arts institutions. The annual college guidebook featured the university for having one of the nation’s most vibrant college communities and named UD as one of three Catholic Colleges of Distinction in Texas.

The academic distinction is presented to colleges and universities identified by educational professionals nationwide for exemplary commitment to engaged students, great teaching, a vibrant community and successful outcomes. According to the guidebook, “While pursuing their undergraduate degrees, University of Dallas students grow spiritually, intellectually, socially and creatively through various student organizations and activities.”

"We're excited to be named a College of Distinction once again," said John Plotts, executive vice president for enrollment and student affairs. "We're especially pleased to be recognized for our faculty's stellar teaching, our unique Core curriculum and our vibrant liberal arts community, all of which set UD well apart from other institutions."

As a champion of the liberal arts, UD imparts a formative experience on its undergraduates, who study the great deeds and words of Western civilization through the university’s Core curriculum. The curriculum engages students with a dedication to the pursuit of wisdom, truth and virtue, equipping them with critical and analytical thinking powers to solve unique challenges for future employers.

“It’s no secret that the dynamics surrounding higher education and postgraduate employment are changing fast these days,” wrote Christine Henseler, professor of Spanish and Hispanic Studies at Union College, in “Want Your Kids to Have a Secure Future? Invest in a Liberal Arts Education.” On behalf of the college guidebook, Henseler more recently published the Huffington Post article “Liberal Arts Is the Foundation for Professional Success in the 21st Century.”

UD has been included on multiple well-known "best college" and "best value" lists, among these the Fiske Guide to Colleges, The Princeton Review, Forbes, and Money magazine. Lesser known institutional rankings for 2017-18 include: