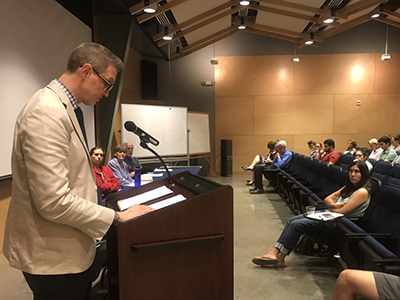 “The study of liberal arts here at the University of Dallas, in particular the Core curriculum, helps reveal to us the dark corners of our own ignorance,” explained Associate Professor of Theology and Associate Provost John Norris, BA ’84, in his introduction to the Interdisciplinary Celebration of Human Dignity panel on March 23. “It leads us to deeper complexities of human knowledge and experience.”

The Core, Norris went on, strives to develop habits of mind, instilling in the community the reverential pursuit of truth as it challenges students to cast aside lightly held positions — or at the very least to examine them. One’s own perspective is incomplete without taking into consideration the points of view of others, and we must suppose that others have useful and valuable things to say.

“The notion of the ‘UD bubble’ can be problematic,” said Norris. “It’s okay if we mean an island of reason, respect, courtesy and dialogue, but not if we mean there is no diversity. At UD, diversity is an asset to our community.”

A UD education is meant to foster reason, respect, humility and charity and to produce alumni who will champion these virtues throughout their lives.

Adjunct Assistant Professor of Philosophy John Macready, MA ’11 PhD ’16, Professor of English Eileen Gregory, BA ’68, Assistant Professor of Human Sciences Carla Pezzia and Professor of Psychology Robert Kugelmann comprised the panel, a project organized by the English Department’s Matthew Spring, PhD ’15, in conjunction with the Office of Personal Career Development and Student Foundations. Panelists explored the role of the liberal arts and the Core curriculum in opening our minds and our hearts, as well as the doors of our homes — offering human warmth to those in need of it.

Macready discussed how UD’s motto — veritatem, justitiam diligite, or "love truth, love justice" — is an imperative for living a dignified life and respecting the dignity of others. Moreover, truth and justice are coupled together in this single imperative not just for the sake of grammatical economy: they are never mutually exclusive and must go hand in hand. We must strive for a disposition of mind in which we come to truth in dialogue with others, respecting their humanity and personhood as we honor and recognize their irreplaceable uniqueness.

“Practical advice for cultivating this position is found in the Core,” said Macready.

Kant, as Macready explained, found it necessary to think of others. In his three maxims of common understanding, he taught, first, that to think for yourself is to be unprejudiced and liberated from the tyranny of common opinion. Next, to take the perspective of others is to be broad-minded, enlarging your mind to accommodate these perspectives. Finally, the third maxim is to think consistently between the first and second maxims; to always think in accord with yourself and your values is to be consistent and not subject to either your own or others’ vicissitudes.

Macready maintained that both Socrates and St. Thomas Aquinas thought for themselves through the perspectives of others, exemplifying these three maxims of Kant’s; specific examples are Socrates' dialogue with Thrasymachus in the Republic and St. Thomas' indebtedness to Moses Maimonides, Ibn Sinā, and Aristotle in the Summa Theologica. Like Socrates and St. Thomas in these instances, Kant does not tell us how to act but how to take others into account, respecting their dignity and their personhood.

Next, Gregory explored how human life and civic life are are dependent upon some notion of respect for the dignity of others.

“In the wake of the extreme negativity of the political campaign we all just witnessed, issues with immigrants and refugees have gained prominence,” she said. “We must consider how such visceral divisiveness has surfaced in the U.S.”

She went on to address the question of whether a university education such as that offered by UD is worth it — maintaining, of course, that it is, because it cultivates a reflective life, and reflection is our true work. Ideas have consequences, and the literature we read tells and shows us what it means to be human and act in a human way, like Achilles and Priam weeping together even though Achilles has killed Priam’s children.

“Our bodies and the bodies of those we love are wholly penetrable and can perish in an instant,” said Gregory. “We have no real control and live in a constant state of radical mortal exposure. We are dependent for our lives on the goodwill of others.”

She discussed how hospitality to the stranger is actually divine law: it is a central ethical principle in Christianity, Judaism and Greek mythology. The stranger is protected by the highest form of justice; to be pitiless to the stranger is to forget one’s own precarious mortality and to be the recipient of the severest form of divine retribution, because everyone is vulnerable and exists under a profound need for protection.

“Literature asks us to imagine ourselves as bereft, destitute and homeless,” she said. “We don’t want to; there’s an aversion to this image. Our culture presents us with invulnerability as something to strive for, but those with a liberal education should recognize this for what it is and see the brutality of the myth of invulnerability. We must be in the presence of those who suffer however we can, imagining others in their likeness to Christ.”

Continuing in this vein, Kugelman discussed how Carl Jung saw the liberal arts as indispensable to the education of the psychologist, because a psychologist was a doctor of the soul. Jung believed, in those days of the Iron Curtain when nuclear weapons stood (and still stand today, although we tend to forget it) ready to be released, and the world was consumed in mass-mindedness, that American education neglected the study of the liberal arts and the sustenance of the soul. There was a nationalistic egoism in which education promoted nationalistic ends and confused the individual with the nation, leaving the individual life devalued in its shadow.

“But we at UD aren’t safe from collectivism,” Kugelman warned. “There’s a kind of ‘UDism,’ a sense of superiority and the feeling of being correct. Feeling confident in one’s opinions is no guarantee that they are correct.”

“The brighter the light, the darker the shadow,” said Kugelman, quoting Jung. “What we can’t see in ourselves, we find easily enough in others. The imagination for evil, on the other hand, is the ability to imagine what we’re capable of. A lack of insight deprives us of the capacity to prevent evil.”

Americans have an addiction to innocence, to not wanting to know, which can translate quite easily into complicity with evil.

“When we try to create a bubble,” said Pezzia, “we foster division, not inclusiveness.”

In the Human Sciences program, as Pezzia explained, they focus on the development of a comprehensive understanding of the human being, including both anthropology and sociology. They look at breaking social norms through experiments such as invading another person’s space, seeing how that person reacts. When interviewing others, they do so with the mindset that the interviewer is not the expert; rather, the person being interviewed has information they need to know.

Pezzia’s work and research has dealt largely with Native American populations, specifically the Mayans, and alcoholism in these groups; however, she emphasized how stereotypes tend to disregard history and context.

“If I go in with a focus on the disorder in a population, I deny these people dignity,” she said. “To go in with superiority and presuppositions is to miss out on insights. Alcoholism, for example, is not a defining component of any one culture or group of people.”

Pezzia explained that instead the mindset must be that everyone comes to the table with a variety of experiences and ideas, and we’re working toward a world that allows everyone to reach their fullest potential. She discusses W.E.B. DuBois' notion of "double consciousness," in which African-Americans in particular typically must view themselves through the lens of how they see themselves and also that of how others see them.

Using this as a point of reflection, Pezzia suggests that we should ask ourselves, first, how we see other people. How do we ensure that what we see is their human dignity rather than our socialized stereotypes and preconceived notions based on misconstrued ideas surrounding a group of people? It is through this self-reflection of how we see others and, conversely, how we want to be seen, that we are more likely to work together and encourage each other to reach our fullest potential.

“We must be willing to work alongside someone to help them,” she said. “This goes along with hospitality. And we have to keep being hospitable even when we get bitten — because that’s how we’re supposed to be.”