Recognized as ‘One of the Best’ for 10th Consecutive Year 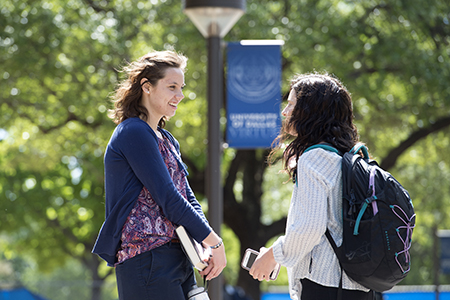 The University of Dallas has been included, once again, in the 2018 edition of the “Fiske Guide to Colleges,” remaining the only Catholic college or university in the southwestern United States to receive such an honor. This marks the 10th consecutive year that the university has been recognized by the Fiske Guide as one of the nation’s best and most interesting universities.

“The University of Dallas has long been recognized for offering a thorough education in the classics of Western Civilization,” said John Plotts, executive vice president of enrollment and student affairs. “It’s an honor to be included in the ‘Fiske Guide to Colleges.’”

The Fiske Guide hailed the University of Dallas as appealing to “those students who pride themselves on being the ‘philosopher kings of the 21st century,’ but whose roots go back to the Roman thinkers of an earlier era.” It also highlighted the university’s semester-long study abroad Rome Program and its Roman Catholic affiliation and influence.

The guide includes 26 Catholic institutions among the 300-plus selected. It also includes three other Dallas/Fort Worth universities: Southern Methodist University, Texas Christian University and the University of Texas at Dallas. According to Fiske's criteria, the selection of schools is based on academic strength, extracurricular activities and overall quality of life.

Compiled by former New York Times Education Editor Edward B. Fiske, the "Fiske Guide to Colleges 2018" is a selective, subjective and systematic look at more than 300 colleges and universities in Canada, Great Britain and the United States. For more information, visit www.sourcebooks.com and www.fiskeguide.com.