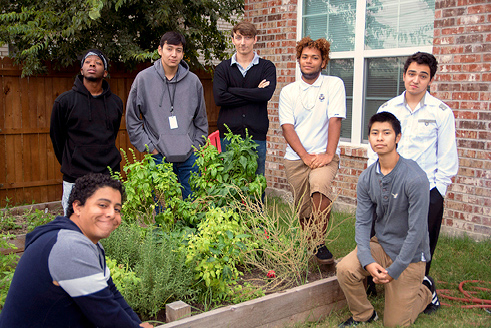 Fredy Gonzalez, BA ’18, started out as a chemistry major, a transfer student who had taken some classes at North Lake College prior to arriving at UD in 2015. He then moved on to philosophy and has finally settled on classics; he now feels confident that he has found his desired discipline.

“Classics offers an understanding of the human and the world through the words themselves. I really believe that,” he said. “I think the world conveys itself to us in music, colors and words.”

Gonzalez left his parents’ place when he was 16 and spent about eight months couch-surfing in the homes of various friends, continuing to attend Nimitz High School in Irving and working part-time in Irving’s old downtown district making horse cinches. Finally reaching the end of his resources, he approached his manager, who contacted Irving ISD; the ISD, in turn, connected Gonzalez with the La Buena Vida Youth Leadership Foundation.

The foundation helps students who have the desire to graduate from high school but not the means; many, like Gonzalez, are unaccompanied youth who no longer have the support of parents or guardians. La Buena Vida works in conjunction with Irving ISD to help these young people obtain the resources they need, including transportation through the Dallas Area Rapid Transit (DART) system and a place to live. Through this program, Gonzalez was able to move into La Buena Vida Foundation’s prototype living quarters, a furnished one-bedroom apartment used to house two students willing to maintain part-time employment along with good grades and regular school attendance.

“Once I was in the apartment, there was time for prior impressions to settle in my head. Once that happened, I started to feel like I needed something else to do besides work and school. I started to read a little, and that activity built on itself,” said Gonzalez.

The foundation helps students apply for college, including scholarships and financial aid, working to make the process less intimidating as well as affordable for them. Gonzalez, after graduating from Nimitz, moved on to North Lake College. Once he’d exhausted what North Lake could offer, he began looking at options for continuing his education; a school in California held particular interest, but the chances of being able to transfer there seemed slim. Then, his chemistry professor at North Lake, whose husband teaches at UD, asked Gonzalez if he’d ever considered the University of Dallas.

He hadn’t, but upon looking into it, he discovered that the La Buena Vida Foundation actually had an agreement with UD that offered a full scholarship to any La Buena Vida student who applied and was accepted to the university.

“I wouldn’t be at UD if it weren’t for this collaboration between UD and La Buena Vida,” said Gonzalez.

Currently a junior, Gonzalez will soon begin preparing to take the LSAT and GRE, though as a writer, his primary goal post-graduation is to accumulate life experience while writing and pursuing other artistic avenues.

“Still, I think to some extent you can measure your freedom based on your options,” he said. “Taking those exams will help me keep my options open.”

His plans also include participating in UD’s summer Rome semester immediately after graduation, as he hasn’t had the opportunity to take part in the traditional fall or spring Rome Program; after that, he plans to spend the rest of his life traveling as much as possible.

“I think the best way to learn about yourself, to find out the real parts of your nature, is to be a stranger,” he said. “You find out how you act around a culture and a language you don’t know. I think the best writing comes from seeking out life.”

And seeking out life is exactly what he plans to do. Above all, Gonzalez is grateful to La Buena Vida and UD for helping him achieve the freedom to choose the type of life he wants to lead.