One of America's 'Best Colleges' 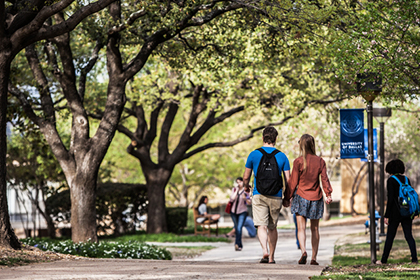 The University of Dallas reinforced its placement as one of the nation's top universities in the 2018 edition of U.S. News & World Report's Best Colleges guidebook. Published online Tuesday, Sept.12, the guidebook credited the university as the highest-ranking "Best Value" Catholic institution in Texas. Expanding beyond Texas to encompass the whole Western region, the university ranked fourth overall.

"Being recognized once again as one of the country's top universities is a well-deserved honor and privilege. Rankings like these are a testament to the university's world-class faculty and the quality of our rich academic environment," said University of Dallas President Thomas W. Keefe.

In addition to being named one of America's Best Colleges, the university earned recognition in several other categories, including "Highest 4-Year Graduation Rate," "Most Students Studying Abroad" and "Most Students Receiving Merit Aid."

Since July, the University of Dallas has received several honors and distinctions, including being named one of the country's best institutions for undergraduate education by The Princeton Review and one of "America's Top Colleges" by Forbes.

U.S. News & World Report ranks schools based on categories created by the Carnegie Foundation for the Advancement of Teaching. The "Best Value" category takes into account the academic quality of the institution and the average amount of need-based aid provided to students. Today, it is among the most comprehensive research tools for students and parents considering higher education opportunities. For a complete list of rankings and more information on the Best Colleges ranking methodology, visit www.usnews.com/colleges.