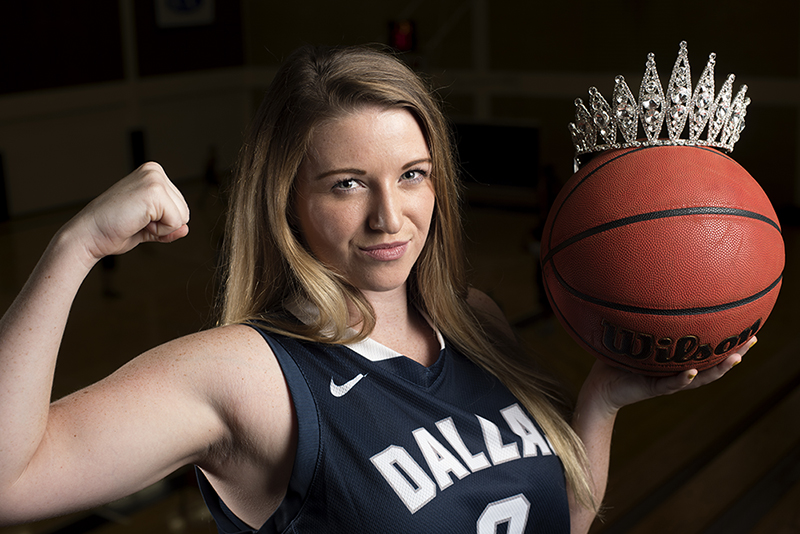 “We all had nerves; we were biting our nails off,” said Shelby Waldron, BA ’18, winner of the 2017 National Elite Miss Texas. “This was one of my first pageants since Miss Beaumont in 2013 and only my second Texas pageant.”

"UD has helped teach me how to think rather than what to think. I’ve learned how to be more confident in front of others presenting in class and participating in group discussions.”

As a student-athlete at the University of Dallas, Waldron is no stranger to her position of glamour at center stage. She entered her first Little Miss Beaumont pageant in her California hometown at six years old; in 2012, she was named one of three princesses, and the following year she won the title. “I entered the Miss Beaumont pageant because it was an easy route for getting involved in my community and volunteering around my town,” said Waldron. “These pageants are much more natural; there aren’t fake teeth or hair extensions like you see on Toddlers & Tiaras. It’s not as glitzy.”

As Miss Beaumont, Waldron committed herself to completing thousands of volunteer hours and appearing at local events around town with her fellow pageant queens. She also started the nonprofit Shelby’s Locker, collecting gently used sports equipment and re-distributing the equipment to area youth sports teams. “Eventually, I would like to raise enough funds to sponsor high school senior athletes looking to go to college,” she said.

An avid sports junkie, Waldron earned nine varsity letters at Beaumont High School — in golf, basketball, softball and track, just to name a few. Following her Miss Beaumont crowning, Waldron went on to represent both California and the United States, earning a spot on the USA Basketball Team and competing at the United World Games in Austria.

In 2014, Waldron shelved her dream of going on to win Miss California as she readied herself for a cross-country move to Texas to begin studying psychology at the University of Dallas, where she plays as a guard on the basketball team and also runs track. Now in her senior year, Waldron hopes to find a happy medium between psychology and her love of sports, one day becoming a sports psychologist.

After running alongside her track and field teammates last spring in the Hardin-Simmons Invitational in Abilene, Texas, Waldron packed up her athletics gear to drive down Interstate Highway 35 East and compete in the Miss Waco Pageant.

“My whole UD basketball team started texting and congratulating me after I’d won the qualifier in Waco,” said Waldron. “Next summer, I’ll be back in Houston to compete for the National Title!!”

Before competing for Miss Texas this past August, Waldron spent the summer with her family back in California, preparing herself for another pageant, including how to answer the judge's questions during the personal interview.

“Talking on stage is typically one of the scariest parts of the entire pageant,” she added. “During Miss Texas, I was much less nervous, because I had from April to July to get back in the pageant routine. I went in level-headed and with confidence,” she said.

The morning of the Miss Texas pageant, the judges grilled each contestant with a handful of questions, including, “If you won a million dollars, what would you do with it?”

Waldron simply responded: “Put some in savings, pay off my student loans and donate the rest to charities.”

“UD has helped teach me how to think rather than what to think,” continued Waldron. “I’ve learned how to be more confident in front of others presenting in class and participating in group discussions.”

Later that afternoon, as the judges announced this year’s Miss Texas queen, Waldron’s phone started blowing up with social media alerts, text messages and phone calls from friends and family. “My family back home and all my UD teammates were watching on Facebook Live; they knew I’d won before I could even make an announcement.”

In early October, Waldron will ride alongside her fellow pageant queens and princesses at the State Fair of Texas in Dallas as the 2017 National Elite Miss Texas. She plans on sporting her Miss Texas crown at any opportunity she can, including at campus events.

“It was a long summer, but most importantly, I’m excited to be back at UD, finishing my senior year of college. This is my Texas,” she said.