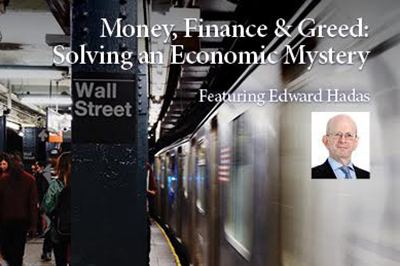 In the modern economy, too often our financial system fails drastically, moving from one devastation to another. As part of recent efforts to promote Catholic Social Teaching, the University of Dallas welcomes guest lecturer Edward Hadas on Monday, Nov. 27, as he explores the relationships among finance, money, the economy and the human condition.

The lecture, "Money, Finance & Greed: Solving an Economic Mystery," will take place at 4 p.m. in the Serafy Room in SB Hall.

Hadas will be drawing his lecture from a series he has been teaching at Blackfriar’s in Oxford, which explores why the financial system of the modern economy tends to fail, concluding that its primary flaws are essentially moral. While a research scholar at Oxford University, who has earned degrees from Columbia University, Oxford and the State University of New York at Binghamton, Hadas’ work in finance extends beyond academia. He worked for more than two decades as a financial analyst in Europe and the United States.

Now a freelance journalist, Hadas writes regularly for Reuters Breakingviews, a globally-run media platform that provides financial commentary, and CIGI, a Canadian think tank. Whether it be in the lecture hall or news stories online, his counter-cultural application of moral values to seemingly secular topics such as finance and economics reflects the principles of Catholic Social Teaching, a movement that has been steadily rising in significance over the recent years.

While many may argue that religion should not be brought into discussion alongside matters of economics or politics, Constantin College Dean Jonathan J. Sanford, Ph.D., emphasizes the value of bringing such a perspective to these issues: “One can strip aside the label--Catholic Social Teaching--and deal directly with the principles to help see its relevance to secular topics. Principles like solidarity, subsidiarity, justice, recognizing the dignity of each person, and the precepts of natural law have application in every walk of life, including finance and industry.”

According to Sanford, this recent focus on Catholic Social Teaching is the result of efforts made on the part of the Vatican to codify the Church’s teaching in those areas that provide the foundation of any flourishing society, including its 2005 publication of The Compendium of The Social Doctrine of the Church. “One of the results of reflection on the contents of The Compendium is that Catholic Social Teaching is not a mere part of the Church’s reflections on moral matters relating to our individual and social lives, but in fact a focused way of encompassing the whole of those reflections,” said Sanford.

The University of Dallas is not an observer of this movement; it, in fact, plays a crucial role in raising awareness of Catholic Social Teaching: “There is a critical niche in Catholic higher education waiting to be filled: intellectual formation that is both doctrinally sound as well as adapted to the training of intellectuals and professionals in the social arena,” said Sanford. “The University of Dallas is uniquely positioned to fill this niche. In doing so, it can make a special contribution to the Church and impact profoundly American and indeed international culture in the area of Catholic Social Teaching.”