Praying as a Family 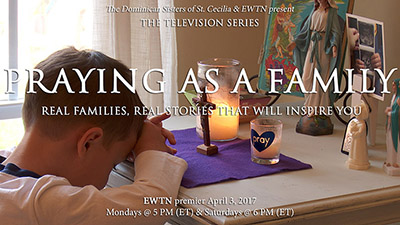 All families struggle, and the approximately 35 families featured in the upcoming Eternal Word Television Network (EWTN) series “Praying as a Family” are no different. Some have experienced infertility, divorce or the tragic death of a child. All have found ways to come together and pray as a family, thereby strengthening both faith and family life. EWTN partnered with the Dominican Sisters of St. Cecilia (also known as the Nashville Dominicans), three of whom serve at UD and nine of whom are UD alumnae, to share these families’ stories with all of the other families out there who need to know they’re not alone, that their everyday struggles are the struggles of all families, and that there is hope even on what might seem like the darkest days.

Nashville Dominican and UD’s affiliate assistant professor of theology Sister Jane Dominic Laurel, a UD alumna, directed the series, the idea for which sprung from a book published by the sisters in 2014, Praying as a Family. Two other sisters, Sister Maria Frassati Kieckhefer and Sister Mary Andrew Hession, assisted Sister Jane Dominic, and many others served in consultation. Sister Maria Frassati operated the boom and was in charge of consultation on makeup and dress. Sister Mary Andrew was the script supervisor and assisted with sound.

“We’ve had a longstanding relationship with EWTN, and they approached us about doing some kind of show; we thought, why not a TV series based on the book?” said Sister Jane Dominic. “However, the series blossomed into something much more beautiful; the book just couldn’t touch on the sorrows and struggles of families the way the series does, nor could it capture the joy and the laughter of moms, dads and kids just being themselves together — as family.”

The Nashville Dominicans serve in 49 schools all across the U.S., in 28 different dioceses, so the families featured in the series were among those suggested by a brainstorming committee of the sisters, who thought of families they knew from these schools and dioceses. Not all of the proposed families felt called to participate or were able to take part. The families ultimately chosen run the gamut from small (including couples who have not had children and also families with single parents) to large and from young to old, falling across the socioeconomic and cultural spectrums.

“They all have one thing in common,” said Sister Jane Dominic, “their love for God and their desire for God to be at the center of their families.”

Prior to filming, the three sisters in charge of the project — Sister Jane Dominic, Sister Maria Frassati and Sister Mary Andrew — traveled to meet with each of the families in their homes.

“We were trying to hone down the stories and find the gift each family had to bring to the series,” explained Sister Jane Dominic.

Each of the 15 episodes in the series, which will air once a week beginning April 3, has its own theme; examples of these themes include "Forgiveness," "Building a Family Culture" and "Sorrow and Hope." The families featured in each episode all have stories that align in some way with the episode’s theme. The filming took place in four different locations across the South: Memphis, Nashville, New Orleans and Greenville, South Carolina. The families each traveled to one of these locations for the filming.

One couple lost one of their seven children in a boating accident; where blame might have been assigned to one spouse by the other, instead their faith carried them through. One woman divorced her husband under extremely difficult circumstances but strives to raise her children with faith at the center of their family life; she talks about how faith and the saints were central to her and her children overcoming their ordeal.

Other families have worked to change their household to be less secularly inclined — replacing, for example, the television as the focal point of the family room with a sacred space for family prayer. Others pray the Stations of the Cross with small children clinging to them, asking when it will be their turn to blow out the candle.

“As part of the communion of saints, these families are our families too,” said Sister Jane Dominic. “They have had struggles too and can help us through ours; it’s important for families to know they’re not alone and that part of life and the joy of love is the self-sacrifice that comes with it.”

The Nashville Dominican sisters originally wrote their book because while their primary mission is teaching, they realized that what both students and parents desired was a closer and deeper family life. For the past five years or so, the community has made renewing the family one of their apostolic initiatives.

“All of this has really come out of that goal,” said Sister Jane Dominic. “These are concrete ways we’re carrying it out.”

What the sisters have seen is that many families want to pray and to come together in this powerful way; it is simply that sometimes they don’t know how. Both the series and the book, which has been translated into Spanish, French, Chinese and Arabic and is in the process of translation into Dutch and Polish as well, address this desire, offering concrete, step-by-step ideas for prayer in the family. Additionally, the sisters give prayer workshops for families based on the book.

On Feb. 2, the EWTN live show At Home with Jim and Joy will interview Sister Jane Dominic, Sister Maria Frassati and Sister Mary Andrew about the series, and on April 3, the first episode will air. In the meantime, the book can be purchased through the Nashville Dominicans’ website.

“We want to help families," said Sister Jane Dominic, "and to support them in growing closer to God and to one another."