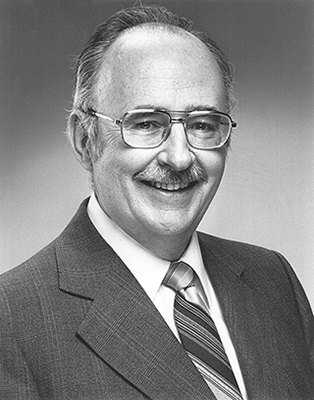 “Liberal education has the potential to touch souls, to form character, to deepen understanding, as well as to develop the intellectual skills required by the world today,” wrote Robert Francis “Bob” Sasseen, university president from 1981 to 1995, in the University of Dallas 1990 annual report.

The university community mourns the passing and remains forever grateful for the dedication and contributions of Sasseen, who is credited with stabilizing the university during his tenure as president. He passed away on June 14 in Salem, Oregon, at age 85.

According to University Historian Sybil Novinski, Sasseen gave his heart to the University of Dallas, coming on board at a time of significant change and financial difficulty and providing the needed leadership of a steadying hand. Before his arrival, the administration had launched a $15 million capital campaign to build new science laboratories. Under Sasseen’s oversight and cultivation of donors, including Beatrice Haggerty, the campaign expanded to $20 million and completed not only the Patrick E. Haggerty Science Building but also the award-winning Chapel of the Incarnation (now the Church of the Incarnation). Other campus improvements during Sasseen's tenure included updating of all the Irving campus utility systems, which had been in dire need of overhaul.

Many of Sasseen’s achievements as president can be credited to his connection with both university benefactors and the faculty. He shared a bond with and admired the faculty, and it was under Sasseen's presidency that the Faculty Senate was formed, as well as other crucial university councils and boards. Sasseen appointed the university’s first provost, fellow political philosopher John Edward (Jack) Paynter; together the two reviewed many aspects of the institution, giving particular attention to the Institute of Philosophic Studies and the Rome Program. Toward the end of his presidency, Sasseen also secured the Eugene Constantin Campus as the permanent home of the Rome Program.

"The University of Dallas was blessed to have Bob Sasseen as its second long-term president,” said Novinski. “He provided structures for the university, which was still a quite young institution at the time, outlining systems and processes to continue carrying the university's legacy for future generations."

Sasseen was drawn to the University of Dallas by its mission as a Catholic university, and in his presidency, he always strove to promote and further this mission. As he wrote in a 1995 review of The Challenge and Promise of a Catholic University (a collection of essays by University of Notre Dame professors), “The nihilism and relativism now dominant in the contemporary academy are not accidental. They are the fruit of its original founding in the opposition of reason and faith. If that is true, the modern university cannot be taken as the model of a great university. The rebirth of the Catholic university in America requires a better model and a truer vision. It requires a vision that unites faith and reason at the core of the university, perfecting it in the manner grace perfects nature, in the way that faith supports and illumines reason in its quest for truth and wisdom.”

“As president of the University of Dallas, Bob Sasseen continuously emphasized the quality and distinctiveness of the UD curriculum and experience,” said Chairman and Professor of Politics Richard Dougherty. “That articulation of the high mission of the university (‘A place for leaders,’ as the tagline said) was a welcome beacon in higher education. In his latter years, as he returned to the classroom, students marveled at his energy and inquisitiveness, which indicated a nimble mind at work. Bob's encouragement to me went a long way toward prompting me to finish my own degree, and for that I will be forever thankful.”

Sasseen is survived by three sons, two daughters, a sister and seven grandchildren. His obituary in the Dallas Morning News can be found here. As the 2017-18 school year commences, the Mass of the Holy Spirit will be celebrated for him in the Church of the Incarnation on August 22 at 5 p.m.

“Bob was a man of vision who people trusted immensely,” said Novinski.