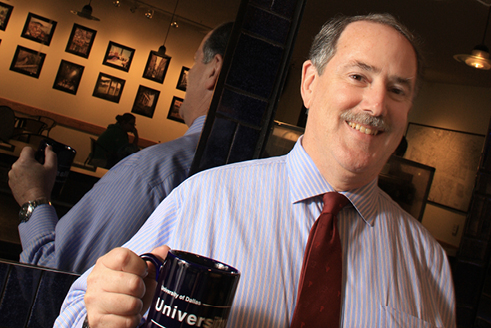 A beloved member of the UD community, Mark Patrick “Pat” Daly, BA ’76 MBA ’82, associate vice president of administration, passed away on March 6, 2017, after a brief illness. His dedication to and impact on the University of Dallas were profound, and he will be deeply missed by all who knew him.

“He devoted his life to the University of Dallas from the time he was 18 and first came here as a student,” said Robert “Bob” Galecke, former senior adviser to the president. “You would be hard-pressed to find a more authentic Catholic; there was no better Catholic than he was. He didn’t talk about it, though, just like he didn’t talk about his dedication to and care for the students. He was a private guy, but his faith and this university were his life.”

Daly’s commitment to students and to the quality of the campus experience marked his management of projects to improve the campus, including the pathway construction for students and staff to access other areas of Dallas through the university DART station; the renovation of Haggar University Center to improve the student dining experience; the improvement to the quality and safety of student housing through the construction of Clark Hall and renovation of Tower Village; the upgrading of academic facilities by the construction of SB and Cardinal Farrell Halls; and the installation of the campus gateways that welcome students and staff home to the university daily.

Daly is especially known for his establishment of the campus Cappuccino (Cap) Bar in 1981 with the assistance of Professor Emeritus of Art Lyle Novinski.

“Who can imagine UD without the Cap Bar?” said Associate Provost and Associate Professor of Theology John Norris, BA ’84. “But I remember what a sterile space it was before Patrick transformed it. We called it ‘the airport lounge.’ Now, stop by Haggar any time of the day and watch how many students are camped out studying, napping or chatting; the beauty and comfort of that space, with its UD heritage of Matrix prints from the Art Department, is Patrick's work.”

“Patrick had a ‘soft spot’ for any student whose parents, siblings or other relatives had worked at the Cap Bar,” said Senior Coordinator of Conferences and Events Kelly O’Neal, MBA ’09. “So much so that he believed those legacies should also be given the opportunity to work at the Cap Bar.”

“The Cap Bar was his baby and by far UD Irving’s closest connection to the Rome campus, which also had a huge place in his heart,” said Director of Facilities Jerry Haba.

In fact, Daly served as associate dean and director of the Rome campus at one point in his 43-plus-year career at UD; his other positions included campus security guard, assistant dean of students, director of purchasing, controller, director of business services and, of course, associate vice president of administration.

With honesty, integrity and loyalty above reproach, Daly used his sensitive eye for detail to select interior furnishings for newly constructed buildings and give common spaces a much-needed facelift, always in a way that supported the changing needs of students.

“He was very concerned with paint color and with whether all spaces would follow and continue the theme instituted by the Landry architect firm as reflected around campus,” said Haba.

“He generously gave of his time to listen to those concerned with preserving the historic architecture on campus,” said Associate Professor of English Debra Romanick Baldwin. “The May 2016 roundtable on our architectural legacy (‘Celebrating and Reviving O’Neil Ford at UD’) really brought out his care for and pride in the campus. He was very proud of the cafeteria renovations, how he worked with architects to arrive at a design that complemented the forms and materials of the rest of the dining area.”

On an everyday basis, Daly also served as UD’s liaison with the City of Irving and other outside agencies, monitoring UD’s land assets and tracking revenue generated from this land. His heavy involvement and oversight of the construction process of Clark Hall, SB Hall and Cardinal Farrell Hall ensured that these buildings all reflect his guidance and handprint.

“I always felt like he was one of my sons,” said University Historian Sybil Novinski. “Utterly dependable, level-headed, kind, hardworking. I suppose if I were writing a headline for a story about Pat, it would say ‘I'll Ask Pat.’ Because, in fact, that is what I have regularly done over the last 20 years as he assumed more and more responsibility — whenever I wanted to know what was going on with a university project, or how to get something done, fixed or sorted out, I would ask Pat for information and advice.”

“Whenever I needed to know anything or try to accomplish anything, I went to Pat,” agreed Norris. “He was our Figaro, our factotum.”

Daly served certain goals in a certain order: the good of the students; the excellence of the university; creating an aesthetically beautiful environment in accord with the historical vision of architect O'Neil Ford; fortifying the UD Rome Program and Rome campus; building community and sustaining the people he worked with; and spending the budget prudently (and when director in Rome, keeping the cars immaculately clean) — all with a quick, wry sense of humor and a not-so-hidden smirk that betrayed his Irish heritage.

“Pat was loyal to UD and had a strong commitment to helping UD grow,” said Haba. “One could see that UD was his family.”

In lieu of flowers, the family has requested that donations be made in Daly's name to the University of Dallas. These gifts should be noted "in memory of Patrick Daly" and will be used to support the Rome Program and the Cap Bar.