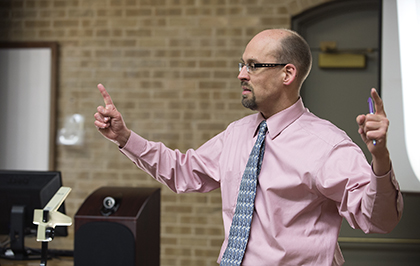 Today, the University of Dallas officially announced that David Andrews, assistant professor of statistics and former chairman of the Mathematics Department, has been appointed associate dean of the Constantin College of Liberal Arts. During his nearly two decades of service to the university, Andrews has taught various undergraduate courses in statistics, computer science and mathematics.

“My new role as associate dean of Constantin College is a personal concern that I hold to the highest degree, because each student who calls the University of Dallas home for four years will know no greater experience,” said Andrews.

“Besides being a celebrated teacher and trusted colleague, David Andrews has served the University of Dallas in many different ways over the years, and I am tremendously grateful to him for putting his wisdom, experience and expertise to work for the whole of Constantin as associate dean," said Jonathan J. Sanford, professor of philosophy and dean of Constantin College.

Largely due to his successes in the classroom and forward-thinking teaching of undergraduates on high-performance computing, Andrews was awarded the SC12 HPC Educator Award, which provided him with a competitive grant to attend the International Conference for High Performance Computing, Networking, Storage and Analysis.

Apart from his teaching experience, Andrews has consulted and worked with a number of businesses, companies and nonprofits. In 2012, he taught a group of Texas Instruments engineers as the technology giant transitioned to another data analysis system; from 2010 to 2014, he developed voter turnout and candidate selection models for the award-winning political consulting firm Nasica; and most recently, in 2016, Andrews developed a data retrieval tablet application for the global nonprofit CARE, so they could better analyze data from their remote food-distribution sites.

Andrews has served on or helped advise more than a dozen university committees including the Faculty Senate (2007-present), the Joint Committee on Business Education (2008-present) and the 403b Review Committee (2013-present), which oversees the university’s employee retirement benefits.