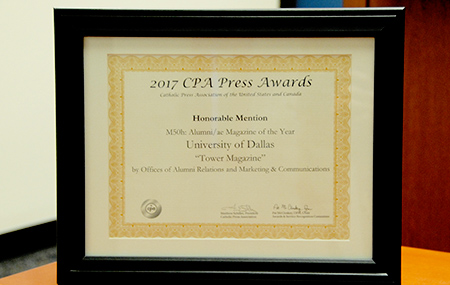 The University of Dallas recently received several marketing and journalism awards from the 32nd Educational Advertising Awards — the largest, oldest and most respected competition for advertising in higher education — and the Catholic Press Association.

“What an honor it is for the university’s alumni magazine to receive such recognition from the Catholic Press Association and the Educational Advertising Awards,” said Erin Dougherty, executive director of alumni relations and annual giving. “These awards represent the culmination of aligned efforts and hard work put forth by our marketing and communications team. We are so proud of the fine magazine they produce for the university with every issue.”

This year marks the first time the university has been recognized with the following awards in each respective category:

For more than 200 years the Catholic Press Association has brought together some of the industry’s leading professionals in Catholic media, honoring excellence in journalism throughout the country with its annual press awards.

The Education Advertising Awards, sponsored by the Higher Education Marketing Report, received over 2,250 entries from over 1,000 colleges, universities and secondary schools throughout the nation, including several foreign countries.

Higher education media professionals from across the country have routinely seen the University of Dallas competing side by side with their institutions in national competitions. Throughout the past five years, the university has added two Council for Advancement and Support of Education (CASE) awards, three Educational Digital Marketing Awards, three Educational Advertising Awards and the first Catholic Press Award in more than a decade.

Whether in professional competition or conferences geared towards other media professionals, the University of Dallas is widely known and respected for its excellence in marketing and communications.