‘Tastemaker of the Century’ Remembered for Culinary Influence and Excellence 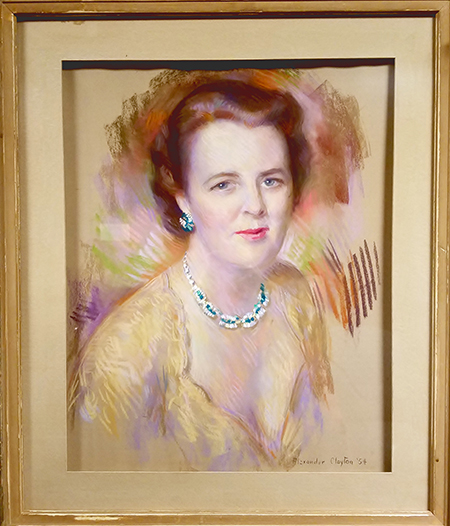 Helen Corbitt instilled 40 years’ worth of recipes and dishes into the Texas culinary landscape with her gourmet cuisine, served as director of food services for Neiman Marcus for 14 years and became the first woman to win the food industry’s coveted Golden Plate Award. Nearly four decades since her passing, the University of Dallas Cowan-Blakley Memorial Library proudly presents the Helen Corbitt Exhibit, featuring Corbitt’s personal collection of papers, awards, newspaper clippings and hundreds of recipes and letters to and from President Lyndon B. Johnson and Lady Bird Johnson, as well as University President Donald Cowan and University Professor Louise Cowan.

The exhibit is available for viewing now through the end of September on the first floor of the Cowan-Blakley Memorial Library on the University of Dallas’ Irving campus. The library is open during normal hours, Monday through Thursday 8 a.m. to midnight; Friday 8 a.m. to 10 p.m.; Saturday 9 a.m. to 6 p.m.; and Sunday 1 p.m. to midnight during the fall semester.

“The Helen Corbitt Exhibit exemplifies the type of woman she was, and how important she was to the university,” said Deborah Hathaway, acquisitions librarian. “She introduced President LBJ to the University of Dallas and the Neiman Marcus Irish Fortnight to Dallasites, transforming international dishes into Americanized cuisine.”

Fondly remembered for her famous “Texas Caviar,” which remains a Neiman Marcus staple to this day, and her favorite fruit salad poppy-seed dressing, Corbitt published five cookbooks during the span of her career that include hundreds of original recipes. She entertained and taught politicians and dignitaries from across the world about the civilized pleasures of the dinner table. The legendary Stanley Marcus dubbed her the “Balenciaga of Food,” and in a fitting tribute two decades after her passing, Texas Monthly declared her the “Tastemaker of the Century.”

In 1940, the red-headed Yankee relocated to Texas to teach at the University of Texas at Austin and manage the University Tea Room. Two years later, Corbitt accepted a position at the Houston Country Club, until getting whisked away shortly thereafter by another employer in Houston. She later returned to Austin, where she would then impress some of Texas’ most influential leaders and socialites, to manage the Driskill Hotel’s dining room and catering.

In 1955, Corbitt accepted an offer to take over Neiman Marcus’ food services in Dallas, turning Neiman’s flagship Zodiac Room into the go-to lunch site in town. Around the same time Corbitt relocated to Dallas, the University of Dallas was beginning to take shape.

A devout Irish Catholic, Corbitt started attending morning mass at the university before work. She became one of the university’s biggest supporters through her friendship with the Cowans and joined the University of Dallas Women’s Advisory Board (fondly known as “Louise’s Ladies”) with 150 of the region’s most influential women.

Both men and women adored Corbitt, and as part of her generosity she taught cooking classes on the third Wednesday of every month for years in her University Park apartment. She hosted benefits for her favorite charities and organizations; the Helen Corbitt Cooking School, in fact, raised more than $150,000 for the Dallas Symphony Orchestra.

Corbitt was revered as a woman of excellence and in 1973, she was awarded the university’s Athena Award, named after the Goddess Athena, for her wisdom, skill and “indomitable spirit and impeccable character.”

Upon her passing in 1978, Corbitt willed half of her estate to the University of Dallas, which provided funding to create the endowment for the university’s annual Helen Corbitt Award for Excellence and helped support special activities on the Eugene Constantin Rome Campus. Her belongings became a part of the two-bedroom Helen Lucy Corbitt Visiting Professor Suite, until the collection was relocated to the University Archives for preservation more than a decade ago.

For more information or to schedule a tour of the Helen Corbitt Exhibit call 972-721-4122 or email dhathaw@udallas.edu.