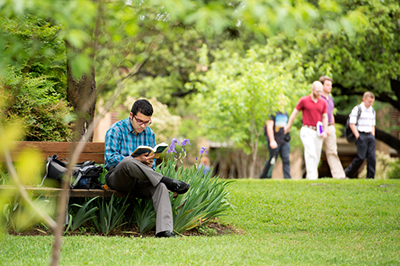 According to the U.S. Department of Education, the University of Dallas has the state’s second-lowest federal loan default rate – 1.5 percent – of any private institution offering both undergraduate and graduate programs. It is the fourth consecutive year the university has seen a decrease in its default rate; the national average is 11.3 percent.

The annual list reports the average percentage of borrowers, as reported by each institution, who entered repayment between fiscal years 2012 and 2013 and then defaulted in their first three years of repayment.

“Our students are finding jobs and not overborrowing so they can pay back their federal debt,” said Director of Financial Aid Taryn Anderson. “Fewer University of Dallas students than ever before are defaulting on their federal loans, which further shows the tremendous value of the education we provide.”

From the 2013 cohort, UD recorded only eight defaults, out of 513 students who entered repayment and remained in the cohort for three years. Sixty percent of UD graduates (who earned bachelor’s degrees) from the Class of 2013 borrowed federal loans, and the average federal student loan debt accrued from those borrowers was only $23,655 per person. According to the Institute for College Access and Success, the national average student loan debt has grown to nearly $30,000. UD students’ overall student loan debt has remained in line with national averages.

When a school’s cohort default rate becomes too high — 30 percent or more for three consecutive years or 40 percent during one year — students of that institution become ineligible to participate and receive federal loans. Because the majority of college students rely on federal loan assistance, the cohort default rate is diligently tracked by the U.S. Department of Education, higher education organizations, news media and schools, which ultimately helps determine the value for a school’s education.