‘One of America’s Best’ 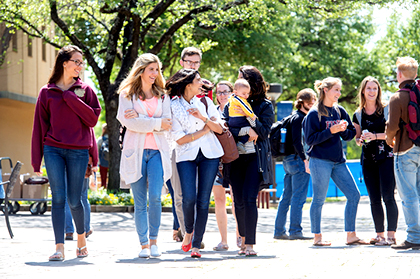 Receiving high marks of excellence in both the 2018 edition of The Princeton Review’s popular guidebook “The Best 382 Colleges” and the annual listing of “America’s Top Colleges” by Forbes magazine, the University of Dallas has earned its placement, once again, among the country’s best academic institutions.

“We are pleased that both Forbes magazine and The Princeton Review have continued to recognize the University of Dallas as one of the country’s premier academic institutions,” said President Thomas W. Keefe. “University of Dallas students are especially motivated to pursue a broad, liberal arts education that uniquely prepares them to assume a wide variety of leadership roles.”

Identified as one of 128 “Best Western” regional institutions, the University of Dallas was also commended by The Princeton Review with several distinctions.

“We picked the 382 'best' colleges for our book primarily for their outstanding academics: we highly recommend each one,” said Robert Franek, The Princeton Review's editor-in-chief and the book's lead author. The college guide’s 26th annual ranking surveyed 137,000 students from across the country, tallying the final rankings based on the responses from an 84-question survey.

Since July, the university has been included on multiple well-known "best college" and "best value" lists, among these the Fiske Guide to Colleges, Forbes and Money magazine.