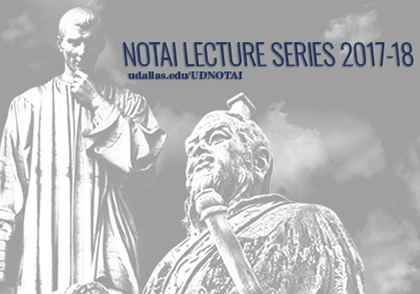 Leadership may very soon become mankind's most valuable asset. Whether designing a new military campaign strategy or navigating the battlefield of a Fortune 500 company, there’s still a lot we can learn from the leaders of our past as we begin to plan the future.

On Thursday, Sept. 28, in the Gorman Faculty Lounge, UD students will get an opportunity to discuss the traits and qualities of two such great leaders at the inaugural North Texas Area Italian (NOTAI) Lecture Series, "The Art of Success: Machiavelli's The Prince vs. Sunzi's The Art of War,” featuring University of North Texas World Languages, Literature and Cultures Senior Lecturer Andrea Polegato, Ph.D.

“Even though we’re talking about works that are hundreds, and even thousands, of years old, there are truths that stretch across disciplines and history,” said Assistant Professor and Director of the Italian Program Antony Nussmeier, Ph.D. “We are making inroads in the Italian community of North Texas; the NOTAI Lecture Series offers an opportunity to unite the intellectual traditions of the West and the East.”

Upon his arrival at UD in fall 2016, Nussmeier was tasked with increasing the visibility of the university’s Italian Program. The day before classes started the following spring semester, Nussmeier attended a day-long faculty retreat with his colleagues in SB Hall.

“The idea was to have us reflect on the UD mission and Core curriculum as these things applied to our own disciplines of study,” said Nussmeier. “One of the first things I noticed was how UD has extremely rich Italian influences. In the Literary Traditions course, students read Dante’s Divine Comedy; Rome students study Italian art and architecture; physics students study Galileo; and theology students learn about the various Italian theologians and popes.”

During one discussion of the Parthenon in ancient Athens, Professor and Director of the Politics Department Richard Dougherty mentioned the famous Italian philosopher and diplomat Niccolò Machiavelli. “Machiavelli came up in conversation on more than one occasion,” said Nussmeier. “This inspired me to call upon my fellow academics and Italian missionaries, which included several of my doctoral classmates from Indiana University, who are actually working at various universities across North Texas.”

Spurred on by his insights gained during the faculty retreat, Nussmeier began preparations to launch the university’s NOTAI Lecture Series, which has added increased visibility to UD’s Italian Program. Last week, in fact, the Faculty Senate approved the university’s first Bachelor of Arts in Italian. “We thought it an opportune time to debut our Italian-focused lecture series for all these reasons,” said Nussmeier.

In November, NOTAI will sponsor the showing of a feature film, Tiramisu for Two, shot in both Rome and Texas, after which the film’s director and producer will discuss the filmmaking process and the importance of media for teaching and learning language, specifically Italian.

In the spring semester, NOTAI will host two more Italian-themed events on campus. The first includes a documentary about three Dallas-based artists who revitalized a small, dying Sicilian town, Prizzi, by painting a series of murals in and around the community during Holy Week 2017. Alumnus David Atkinson, BA ’99, originated and pitched his idea (now known as “Dallas in Prizzi”) to the town’s mayor. The second spring lecture series will include an on-campus lecture, featuring Sarah Kozlowski, assistant director of the Edith O’Donnell Institute of Art History at the University of Texas-Dallas, on Neapolitan sacred altar art.