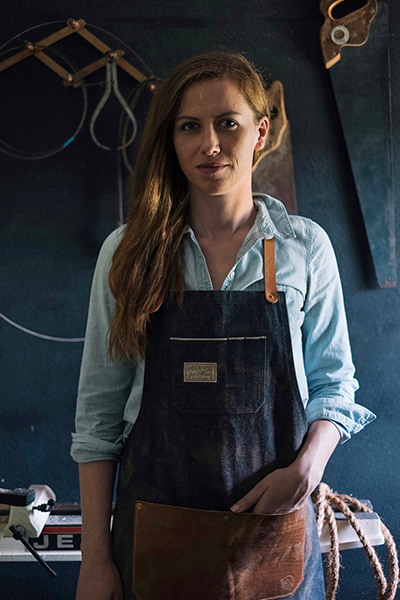 Celina Muire Farrell, BA ’11, initially planned to take her politics degree and pursue a career in the same, moving to Austin with that purpose in mind. However, it didn’t take long for the political world to leave her feeling jaded, so she drew on another UD experience for inspiration: the one shop class she had taken with Andy Myers, MA ’07 MFA ’09.

“He taught a great class,” said Farrell. “He gave everyone confidence in their first attempts at woodworking and welding, and even though what I managed to make looked like a heap of garbage, he still encouraged me. I’d like to think I’ve since honed my craft, but having a good first experience with woodworking was key in pushing me to pursue it further.”

And pursue it further she has. In fact, not only is she now a professional woodworker immersed in the maker movement, she has founded an Austin-based start-up, Hound, to help other makers hone their crafts and make their livings as well.

As Farrell explained, there has been a significant consumer shift in the last decade to sustainable products created ethically and within the U.S.: the American-made movement, which has proven to be much more than a passing fad. Many retailers, including Amazon Handmade, Etsy, West Elm Local and even Target, now cater to this emerging market. However, the makers themselves often struggle to keep up with the demand for their products due to lack of maker resources.

“This means that makers often reach a ‘cap,’ and our goal is to collaborate in order to succeed beyond that cap,” said Farrell. “A modern maker is not only expected to master their craft to create great products, but simultaneously be an accountant, a graphic designer, a marketing expert and a professional photographer. If we truly want to fortify the maker movement, there needs to be adequate resources for the independent maker.”

This is where Hound comes in. Hound incubates these independent manufacturers, providing small business tools, 3-D printing and studio space in a collaborative environment with branding consultants, legal services, photography solutions and wholesale resources — thereby assisting makers in every aspect of business ownership, improving their production velocity and empowering them to focus more time on their craft.

“The more I talked to other makers in the Austin area, the more I realized we were all looking for the same things: same resources, same advice, same studio space,” said Farrell. “It really didn’t matter if you were a woodworker or a ceramist, independent makers all have the same marketing and small business needs. I received so much support from the Austin community when I dived into woodworking. So it was almost a no-brainer to try and open up a makerspace in a city that already understands and cherishes the maker market.”

Starting Hound in Austin has come with its own set of location-specific problems, however: it’s expensive to lease commercial property in Austin, and usable square-footage is, of course, imperative for Hound’s success.

“Sometimes I want to kick myself because Hound could be up and running in a different city for half the cost,” said Farrell, “but I know Austin’s creative landscape is the right birth-town for this endeavor.”

Farrell has braved other rough waters as well, including poor feedback from successful people. She credits her UD training with being able to withstand feedback that was not helpful and to take into thoughtful consideration that which was.

“Adversity comes in many forms, and it’s important to have unwavering faith in yourself and others,” said Farrell. “Luckily for me, this was staunchly developed at UD. Also, you must be able to think for yourself.”

Farrell also played volleyball her first three years at UD and appreciates the poised, positive character of her coach, Eric Miracle. His uplifting attitude spread itself throughout the team and is something Farrell and her teammates — many of whom she still counts among her close friends — persist in carrying with them.

“Challenges to your ideas will make them stronger; challenges to your name will only hold you back,” she added. “To start a business, all self-doubt must be left behind, including those who doubt you. Doubt never made anyone money, and has certainly, to my knowledge, never paid any bills.”

Farrell also credits her well-rounded UD education with giving her the courage to seek other opportunities outside the discipline of her major.

“Every course I took at UD was structurally sound and meaningful, and that foundation has contributed greatly to my various career paths, which include legal assistant, woodworker and entrepreneur,” she said.

A successful Kickstarter campaign and positive feedback from friends, family and other makers provided the fuel and encouragement Farrell needed to stick with her plan. Ultimately, the business model is for makers to invest in Hound to foster their small businesses, and, in turn, Hound will invest in their futures, later providing seed money if and when they’re ready to venture out on their own and in exchange receiving a portion of equity in their growing business.

“I’ve garnered a lot of support from local makers, and I look forward to working with them to redefine the American-made movement,” said Farrell. “I’m excited to see what the future  holds for Hound.”