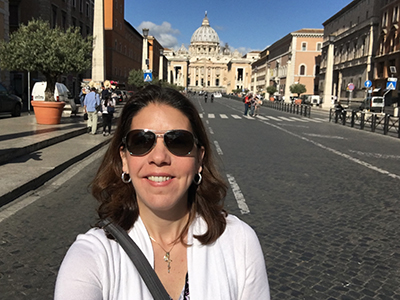 Trustee Megan Smith, D.O., BA ’02 MBA ’18, just returned to Dallas after a trip to Rome for the ribbon cutting to officially open the new dormitory on the Eugene Constantin Campus for this fall’s Romers. Once upon a time, she herself was a fall Romer. This wasn’t her first time to go back, but she always appreciates the chance to return to Due Santi.

However, it’s not simply nostalgia that led Smith to include UD in her estate plan, with the only restriction being that the funds must be used for the Rome Program. Smith strongly believes that her time at UD, including that Rome semester, was fundamental to her career in medicine.

“Even though I was a science major, the Core curriculum was really foundational for me in terms of success going forward in medical school,” she said. “It was incredibly important. Both science and the Core have been integral to my success as a doctor; I probably use the Core on a daily basis.”

Smith attended medical school at the University of North Texas Health Science Center in Fort Worth and now specializes in internal medicine at Colleyville Family Medicine.

As far as including UD in her estate plan, Smith explained that UD had been part of her charitable giving budget every year, so it simply made sense to incorporate it in the longer-term plan as well.

“People think it’s a complicated process, but it really isn’t,” she said. “I told my estate planner exactly what I wanted and was able to include UD very easily.”

She wants others to know that no gift is too small; those funds can be used in some way to enrich the experiences of students. Further, if there’s a program to which you feel a strong connection, as Smith does for the Rome Program, you can designate funds to go specifically to that program.

“You make a lasting impact by doing so,” said Smith.

Discover more about including UD in your estate plans.