Board of Trustees Names John G. Plotts as Interim President 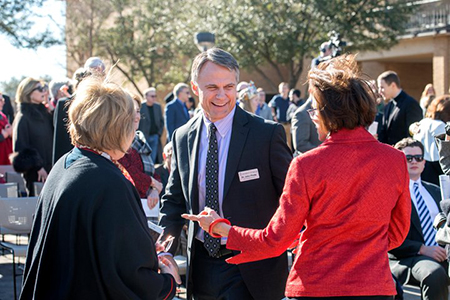 The University of Dallas Board of Trustees has announced the appointment of Executive Vice President John G. Plotts, Ed.D., as interim president of the university. Plotts joined the university in December of 2008, initially serving in the roles of associate provost and dean of undergraduate admissions. In 2011, Plotts was promoted to executive vice president for enrollment and student affairs. In that role, he has significantly grown undergraduate enrollment; this past fall saw both the largest incoming freshman class to date and the incoming class with the highest average SAT score in university history. In the midst of this growth, he has also overseen and attended to the needs of current students.

“After much careful deliberation, we have determined that Dr. Plotts is the best possible choice for interim president,” said Chairman of the Board of Trustees Tom Zellers, M.D. “We believe he has been a strong advocate for the students and their traditional Catholic education as well as a good steward of university assets. He has a leadership style of thoughtful inclusion and transparency, is a remarkably capable administrator and, as he was already serving as executive vice president, will provide continuity and stability in the university’s senior leadership in this time of transition.”

University of Dallas Chancellor and Bishop of Dallas Edward J. Burns expressed his support for the appointment, stating, “I am grateful for John Plotts' commitment and dedication to the University of Dallas and its Catholic identity. Dr. Plotts has shown himself to be a good steward of the university’s mission and vision. I look forward to working with Dr. Plotts during this time; he has my full collaboration and blessings. During this period of presidential transition, I as chancellor and the rest of the board are committed to the university’s Catholic identity, taking the opportunity to strengthen the foundational pillars of the university to ensure it continues to provide excellent education for many years.”

Prior to coming to the University of Dallas, Plotts held the position of vice president for enrollment and accreditation at Parker University, where he restructured and reengineered the college's planning and evaluation process, implemented a new strategic retention program, and raised more than $1 million through strategic business partnerships, in addition to a host of other accomplishments. He was also the dean of enrollment management at Parker University for more than two years. Some of his many accomplishments in that role include creating an enrollment management model, establishing targeted recruiting efforts, and enrolling a class with the highest GPA in the school's history.

Before Parker University, Plotts was director at the Howard Center for Christian Studies and held the following positions at Dallas Baptist University: vice president for executive and student affairs, vice president for enrollment and administrative affairs, dean of the college of adult education, and director of admissions. Plotts received his Doctor of Education from the University of North Texas, his master's degree from Dallas Theological Seminary, and his bachelor's degree from Clarks Summit University of Pennsylvania.

“I am honored to assume this new role and will continue to advance the university’s mission, values, reputation and success during the search for the next president,” said Plotts.

Zellers anticipates that the process of identifying the next president may take six months to a year to complete. His first step was to appoint an ad hoc committee to evaluate and identify search consultant firms to advise the board. Comprising this committee are Vice President and Chief Financial Officer Brian Murray, Trustee Bill Keffler, Trustee Terry O'Halloran, Trustee Julie Weber, Braniff Graduate School of the Liberal Arts Dean Joshua Parens, and Assistant Professor of Theology Diana Raiche.

The next steps will be to identify the members of the search committee and to develop the presidential profile. The trustees will be communicating more details regarding the process in the weeks to come, said Zellers.