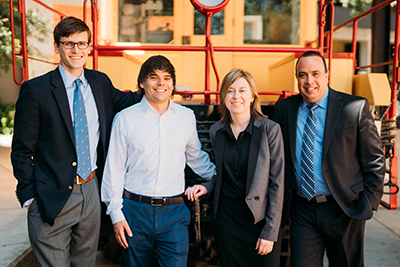 Valor Public Schools founder David Williams, who pursued graduate coursework at UD from 2006-7, and superintendent Steve Gordon, BA ’97 MA ’01, believe that a school should be an environment filled with joy.

Williams was the founding headmaster of Glendale Preparatory Academy in Arizona, where Gordon and Valor’s chief operating officer, Jesse Bates, were assistant headmasters. All three also served as administrators for Great Hearts Academies in San Antonio prior to moving on to found Valor.

“[Glendale Prep] was an attempt at forming a certain type of culture, one in which both students and teachers would flourish both in intellectual and moral terms,” said Williams. “At the heart of this endeavor was a conviction that the human person is fulfilled in community.”

For several years after leaving Glendale Prep, Williams considered how he might found an organization that reflected the ordered, joyful culture of that school on every level of operation. This eventually led to Valor, which, due to generous benefactors, will open its first school in Austin this August. Further, in the next five years, the Valor team, which includes Williams’ wife and co-founder Rebecca Williams, plans to open two additional Valor campuses in the Austin area. They also hope to expand to other Texas cities and possibly other states in the future. They will serve grades K-8 in the beginning, growing to include up through grade 12 in subsequent years.

According to its mission, “Valor Public Schools creates the highest quality K-12 tuition-free charter schools, educating the whole person for authentic freedom and a full human life.” Drawing upon the best of both classical tradition and contemporary educational practice, Valor offers a rigorous curriculum incorporating both STEM and the humanities, with leaders and teachers who are philosophical and practical at the same time.

As put forth in Valor literature, “Great teachers inspire and sustain wonder during the years when students are most prone to becoming apathetic, uninterested people. They accomplish this not by gimmicks or tricks, but by drawing students into provoking and illuminating conversations that address the most important questions of every discipline. A great school understands that when students are fully engaged in their learning, outstanding academic results will naturally follow.”

Both Williams and Gordon credit their experiences at UD with helping to lead them along this path of classical education and founding a school such as Valor.

“My experience at UD, both as an undergrad and a graduate student, was foundational to the path I have followed as a teacher and school leader,” said Gordon. “The deep encounter with the liberal arts tradition that I experienced at UD has informed my work to develop schools such as Valor that cultivate wisdom and virtue and truly educate the whole person. The professors at UD were a model for how to live a rich and vibrant intellectual life, and in my work at Valor I continue to draw upon my experiences at UD — from the integrated liberal arts curriculum to the authentic sense of community to the poetic vision of Dr. Louise Cowan.”

They love to hire UD alumni as teachers and school leaders, and they also hope that many Valor alumni will end up at UD for college. They encourage any UD alumni who are interested in a position at Valor to reach out to them directly.

Ultimately, they hope that Austin’s new classical charter schools will create, as Williams put it, “a community where the dignity of the person is affirmed and friendships are abundant and joyful.”