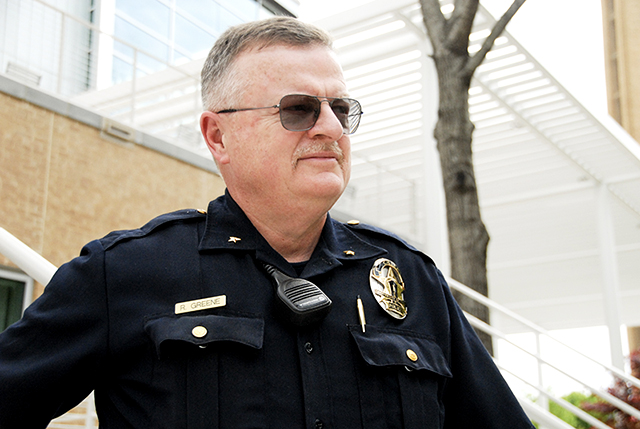 A self-proclaimed Irish-Catholic Yankee and an altar boy starting in second grade, Russell Greene first learned of the University of Dallas upon moving to North Texas in 1994. “I grew up always dreaming of becoming a police officer,” said Greene, who began serving in his post earlier this semester as chief of the university’s new police department.

After working as a reserve police officer in Buffalo, New York, for a few years at the start of his career, his wife had kindly asked him, “Why don’t you go find a place where we can afford to live on a cop’s salary, and the kids can go to a good school?”

Shortly thereafter Greene and his family relocated to Arlington, Texas, where he served as a lieutenant with the city police department for more than two decades. “I remember pulling up to the academy at 8 a.m. in my rusted 1986 Ford Escort with a lawn chair, air mattress and sleeping bag,” he said. “The sky was blue and it wasn’t snowing, two things I especially liked about Texas.”

In his hometown of Syracuse, New York, Greene attended a private Catholic liberal arts school, Le Moyne College, where he earned his undergraduate degree in business administration. Needing a church to attend Mass after moving to Texas, Greene began going to St. Vincent de Paul in Arlington. “It was right down the street from the academy, and I didn’t want to drive my rusted out Escort any farther than it had to go, so they had me as a parishioner by default,” he said.

Over the years, UD would occasionally come up in conversation at St. Vincent de Paul, said Greene, so when it came time to interview for his position on campus, he felt an almost immediate connection. “The more I got into the interview process and came up to campus,” he said, “the more I realized how great a place UD is.”

UD reminds him of Le Moyne in both campus terrain and history. “Le Moyne College overlooked Syracuse up on a hill and started in 1946; even the architecture of the schools looks very similar,” he said. “Altar boy in second grade, Christian Brothers Academy, Le Moyne: it’s the only way for a young Catholic lad from Tipperary Hill to go through Syracuse.”

“There are many reasons for a university to need a police department,” said Greene, who begins most of his mornings on campus at 6 a.m. “As a former city police officer, I’m aware of what the ‘big city’ can bring to campus. Here is a chance to form a police department in the ideals of this university, and yes, this can sometimes be a challenge in today’s society,” he said.

“We’re a phone call away; we’re open 24 hours a day, because the students are here 24 hours a day,” Greene continued. “It’s all about customer service; whether a visitor, an employee or a student, we’re here to serve the entire university population.”

“Everything is a business in the long run,” he said. To add to his expertise and academic degrees, Greene holds a Master of Arts in Business and Policy Studies and an MBA in Strategic Leadership, as well as graduate certificates in change management and human resource management.

“Hopefully in the spirit of UD being a place for an open mind of learning, we can all learn together in the process,” he said. “As guardians of the University of Dallas, our job is to represent the university well, and to keep everybody on campus safe.”

At the end of one of his first day working on campus, Greene approached a mother and student standing outside Cardinal Farrell Hall. He asked, “Can I help you? Are you new here?”

“No, my daughter had just transferred out of UD, and realized she wanted to come back here,” the mother replied.

“Well, everything’s more or less the same, except we have a new police department now,” said Greene, joking, “Have you met the chief? I hear he’s a good-looking young lad.”