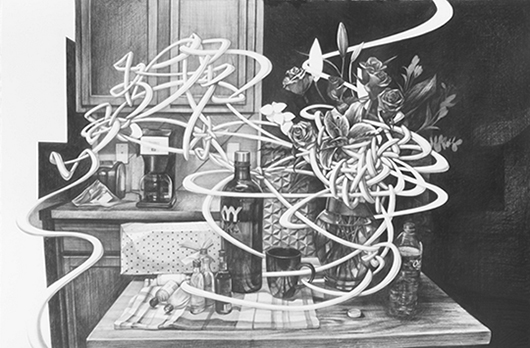 UD's Beatrice M. Haggerty Gallery is pleased to present a group exhibition titled “Shape-Shifter: Drawing from Observation,” featuring four artists who turn the common notion of observational drawing as "drawing what you see" on its head. In their works, everyday scenes and objects are observed, analyzed, recreated, transformed and metamorphosed, creating pictures that present reality as uncommon; with a mix of everyday fascination and vivid imagination, “Shape-Shifter” presents the seemingly ordinary in extraordinary ways.

An opening reception for “Shape-Shifter” is scheduled for Friday, Sept. 28, 2018, from 6 to 8 p.m., on the University of Dallas’ Irving campus in the Haggerty Gallery. Curator and Gallery Manager Christina Hayes Haley will provide short remarks alongside artists Trevor Bennett, Mayuko Ono Gray and Shelby Shadwell at 6:30 p.m. The exhibition will remain open for viewing through Sunday, Nov. 4.

Trevor Bennett currently serves as coordinator of 3D Art at North Lake College in Irving. In his drawings, Bennett recasts familiar objects in plaster multiple times until they lose their original shape. He then photographs the objects before creating large charcoal drawings presented in a photorealist manner. Black and highly reflective knickknacks are shown in his resulting works, which resemble imperfect fidelity through the loss of color and a heavily mediated process.

As a metal-working sculptor, Walter Early works out of his studio in Plattsburgh, New York, where he produces drawings informed by his preoccupation with 3D objects in his practice. Early’s observational drawings of long-sedentary found objects provide their own exploration of sculptural form. Familiar forms take on new shapes with accumulations of snow and ice, overgrown by weeds or ivy, and haphazardly stacked on one another.

Taking her cues from both Japanese and American drawing traditions, Mayuko Ono Gray transforms the wet fluidity of an inky calligraphic line into a winding and weaving shape with volume by rendering it in graphite using chiaroscuro, a stylistic technique that distributes a contrast of light and shadow. Domestic scenes are interwoven with shaped calligraphy, sometimes enveloping people, animals and objects into the script. Gray currently serves as gallery director and adjunct professor of art for the College of the Mainland in Texas City, Texas.

Associate Professor of Drawing Shelby Shadwell of the University of Wyoming brings cockroaches, spiders, trashbags and diapers to life in her large-scale drawings. Rendered in meticulous detail, her drawings manifest the personal fears of many. Constructing forms with traditional drawing techniques, his dark charcoal imagery invites viewers inward to observe the details which we may often turn away from. Diapers and trashbags take on new forms through manipulated stuffing, twisting and lighting. Shadwell will then cast his newly created objects centerstage as the primary subject of his drawings.

Masterfully rendered subjects illustrated in graphite, charcoal and ink, with value, form, light and line, all creating the illusion of 3D objects on a two dimensional page. “Shape-Shifter” veers away from straightforward, realistic drawings of observation by engaging the world around us and stretching the limits of our own imagination to create rich narratives rendered on a monumental scale.