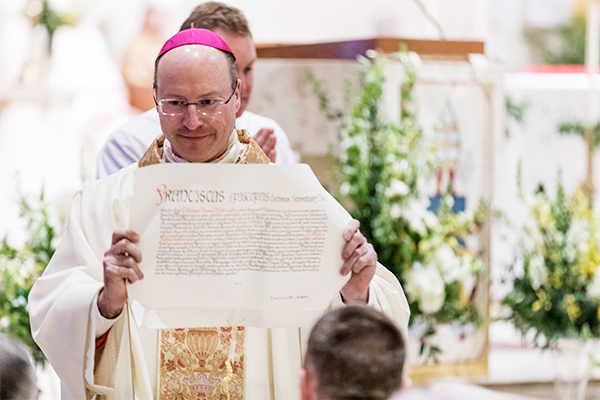 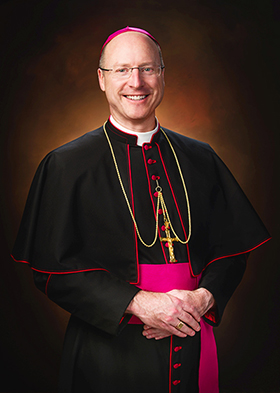 Upon his installation as the fourth bishop of the Diocese of Jefferson City in Missouri, the Most Rev. William Shawn McKnight, BS ’90, became, at 49, the youngest Latin diocesan bishop currently serving in the United States. He now joins almost a dozen fellow bishops claiming UD as their alma mater.

In November, Pope Francis called upon McKnight to lead the diocese, which is in the midst of evaluating the vitality of its parishes with a diminishing number of priests. McKnight is the first new bishop of Jefferson City in 20 years.

“Vocational stewardship is obviously a major need: the need to be present, to encourage youth to be present in the church and to live life to the sacrificial love in vocation,” said McKnight, who previously served in his hometown diocese of Wichita, Kansas, where he was ordained a priest in 1994.

Before his studies here in Irving, McKnight had been accepted into the University of Kansas, where he intended to major in biochemistry in preparation for medical school; he was determined to become a doctor. However, his uncle and godfather had told him about a small, Catholic liberal arts school near Dallas where a high percentage of graduates later studied medicine. Upon visiting UD, the would-be Jayhawk quickly became a Crusader instead.

“UD was small. And it was Catholic,” said McKnight. “In fact, I can’t help but think that the smallness of the place is what made it so meaningful and intimate.”

It was at UD during his junior year, as it happened, where McKnight’s call to the priesthood first asserted itself. Exhausted and beginning to fall behind on his coursework, he spotted a flyer for a university chaplain’s retreat the weekend after completing his Medical College Admission Test (MCAT). “Going on the retreat was really the only way I could get out of my resident assistant duties,” said McKnight.

By the last day of the retreat, he found himself failing to convincingly redirect himself back to his studies: “You have to get back to your girlfriend, classwork and regular life,” he told himself firmly.

Upon returning to his residence hall, however, he received a letter from Father James Billinger, associate director of vocations in Wichita. The letter opened, “Have you thought about being a priest?”

“I was shocked,” said McKnight. “It came out of nowhere; I had just gotten rid of the thought after getting back from the retreat and was getting ready to go onto medical school.”

So he buried himself back into his studies. But the priesthood kept calling.

Finally, by winter break, he scheduled an appointment with Father Billinger back home in Wichita.

“I can say that UD truly changed my life,” said McKnight, reflecting back on his formative Catholic education, including insight and experiences gleaned from UD’s esteemed faculty.

“I have a deep, abiding sense of gratitude to my classmates, faculty and administrators during my years at UD,” he continued. “I remember meeting with Sister Clodovia Lockett, S.S.N.D., and telling her that I had decided to enter the seminary.” The longtime UD biology professor and chair (also known as “Sister Clo”) simply responded, “Well, you better be a good priest.”

Over the next two decades following his graduation from UD, McKnight remained steadfast on his path of vocational stewardship. He attended the Pontifical College Josephinum Seminary in Columbus, Ohio, graduating with a Master of Arts in Theology and a Master of Divinity. On breaks and weekends, he would take road trips to visit his family in Wichita.

After working for a few years as an associate pastor at the Blessed Sacrament Parish in his hometown diocese, McKnight was sent by his bishop to continue his religious studies at the Pontifical Athenaeum of St. Anselm in Rome, earning both a Licentiate and Doctorate in Sacramental Theology.

More than a decade later, McKnight returned home to serve as pastor at the Blessed Sacrament Parish in Wichita before serving five years as executive director of the Secretariat for Clergy, Consecrated Life and Vocations with the U.S. Conference of Catholic Bishops (USCCB).

“The liberal arts opened me up to the study of theology,” he said.

"It is clear to me now that God wisely and providentially led me to the University of Dallas."

Adding to his tenure and service in the church, McKnight has also held numerous professional academic positions, including director of liturgy and director of formation at the Pontifical College Josephinum. “From a biochemistry major at UD to working with the USCCB to launch SEMscience.org, my passion for science has never truly waned,” he continued.

“It is clear to me now that God wisely and providentially led me to the University of Dallas,” said McKnight.

Now charged with leading the more than 90,000 Catholics in 95 parishes and 15 missions in his mid-Missourian diocese, the young bishop invests much of his work into a renewed spirituality of stewardship. “I have been sent to you by Pope Francis,” McKnight testified at his ordination. “In following his pastoral leadership, I hope to shepherd and lead my parishioners of Jefferson City in finding new ways of reaching out to those living on the margins.”

“We must discern the difficult issues facing our families, our cities and towns, state, country, and our world not as individuals but together as a church,” he continued. “It is my dream for each parish to find an unmet need within the margins, offering something to those less fortunate that can also become sustainable.”

Further, to assist in the promotion of vocations, the Diocese of Jefferson City needs to examine unique ways in which deacons can participate in the church's ministry of charity, McKnight explained.

Ordained a priest and now a bishop, McKnight also remains forever a deacon. During his studies of sacramental theology in Rome, in fact, he wrote his dissertation on the permanent diaconate, setting the premise to his forthcoming book, Understanding the Diaconate: Historical, Theological and Sociological Foundations, which will publish at the end of July.