In Memoriam: Margaret McDermott’s Generosity Will Live On 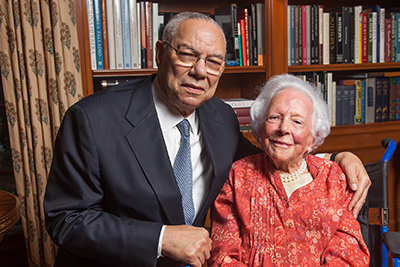 Margaret Milam McDermott, a graduate of Highland Park High School and one-time society editor of the Dallas Morning News, passed away on Thursday, May 3, at the age of 106. Born in Dallas in 1912 and raised in what is now the historic district Munger Place, McDermott will long be remembered warmly and gratefully by the city of Dallas as a marvelously generous benefactor of the arts, education and science, including the university which her late husband, Eugene McDermott, helped to found, the University of Texas at Dallas. UTD, however, is not the only Dallas university to have benefited from Margaret McDermott’s profound generosity.

In 1974, a year following the death of her husband (who like one of UD’s other benefactors, Patrick Haggerty, co-founded Texas Instruments), Margaret McDermott established the McDermott Endowed Lectureship at the University of Dallas to honor UD’s intellectual leaders Donald and Louise Cowan for their “vision and leadership at the university and in the city.”

According to now-retired university historian Sybil Novinski’s cumulative history book, University of Dallas: 50 Years of Vision and Courage, 1956-2006, “The McDermott Lectureship was crucial to the early stability of the liberal arts graduate programs and the university’s relationship to the city of Dallas.”

Through the years the hallmark series has brought thousands of individuals to campus and other Dallas venues to hear such public figures as former Secretary of State Colin Powell and the eighth and last leader of the Soviet Union, Mikhail Gorbachev, as well as leading intellectuals such as Mortimer Adler, Jacques Barzun, Marshall McLuhan and Malcolm Muggeridge.

Glenn Arbery, PhD ’82, then senior editor of People Newspapers and now president of Wyoming Catholic College, described the influence of over 30 years of McDermott lecturers on the university and the region in a January 2006 editorial: “That gift came through the great minds whose presence had been bestowed on us, but it came from Margaret McDermott. Aristotle knew what she would be like when he wrote in his Ethics about the virtue he calls ‘magnificence.’ He wrote that ‘the magnificent … can see what is fitting, and can spend grandly in good taste.’ Just so. Let me register my gratitude — and the gratitude of everyone who ever benefited from such lecturers as Marshall McLuhan, Leon Kass, Rene Girard, Erich Heller or Maya Lin — for the gift of the McDermott Lectureship.”

To ensure comfortable and convenient housing for the annual McDermott Professor, Margaret McDermott also funded and oversaw the design of the McDermott Visiting Professor Suite in the J.M. Haggar Sr. University Center.

For most of its history, the University of Dallas has benefited from McDermott for her support of an institution she very much valued. In 1980, she contributed to the Louise Cowan Endowed Chair of Literature. She consistently attended the McDermott Lecture Series events, well past the age of 100. The university also has received several recent grants from the Eugene McDermott Foundation.

With the value of the McDermott Endowed Lecture and the Louise Cowan Endowed Chair exceeding $1 million each, Margaret McDermott’s impact and influence will persist well into our university’s future.

McDermott is survived by her daughter, Mary McDermott Cook, and her granddaughter, Grace Ellen Cook. Her full obituary can be found here.

* Parts of this story were originally printed in University of Dallas: 50 Years of Vision and Courage, 1956-2006, by Sybil Novinski.

In the photos: Margaret McDermott with Gen. Colin L. Powell, USA (Ret.), at the 2016 McDermott Lecture.