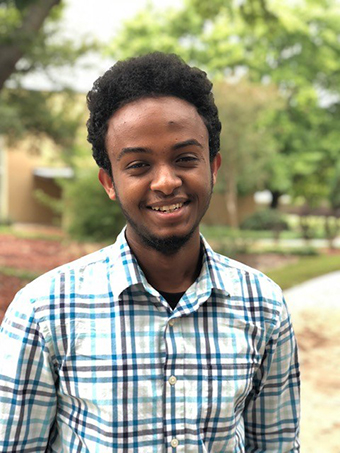 This past summer, Yeabkal Wubshit, BA '20, earned the internship that every computer science major dreams of: a position at Google.

A junior computer science major with a concentration in applied mathematics, Wubshit applied online for the position through the company’s careers site. He was soon contacted by a recruiter and granted the position after a few interviews. He then spent the summer working on infrastructures for Google Service Accounts at Google’s office in Sunnyvale, California.

“Some of the technical skills I learned included facing ambiguous and large-scale challenges, collaborating with engineers, and approaching problems from a different perspective,” said Wubshit. “I was also exposed to an extraordinarily vibrant culture where everyone is so passionate about and dedicated to what they do. One of the things I liked most about my internship was the amount of freedom and responsibility that I was given for my project work, and the amount of invaluable experience that I gained from working with highly experienced engineers.”

A native of Addis Ababa, Ethiopia, Wubshit found his way to the University of Dallas after hearing about the school from a friend, who now also attends UD. One of Wubshit’s deciding factors for UD was its small size, and he claims that it was not until after he began attending UD as a student that he truly appreciated its campus environment and rigorous academics.

“I love the community that is spiritually and intellectually rich,” he said. “I always feel blessed to be a part of it.”

Regarding his computer science major, Wubshit said, “What I love most is the intellectual freedom you have as a problem solver. Of course at the end of the day you are trying to get the optimum solution for a problem, but there are possibly multiple ways to get there. I like the fact that computer science allows you to approach problems from different perspectives and through different available tools. Also, I’m interested in building and creating things, and computer science allows me to do just that.” Although he is not quite sure exactly what the future holds in store, Wubshit plans to use his expertise after graduation to become a software engineer.

Like many other UD students, Wubshit’s interests extend beyond his own major. Some of his favorite classes he’s taken include classes in the Core, specifically Assistant Professor of Theology Irene Alexander’s Understanding the Bible and Literary Tradition II with Kenneth Marchetti, MH '11 MA '14. Outside of the classroom, Wubshit plays on the men’s soccer team, serves as secretary of the Association for Computing Machinery Student Chapter, and participates in the Programming Team.

“UD’s education has been valuable to me in that it has exposed me to ideas that help me grow not only intellectually, but also as a person because the topics raised in the Core are highly linked to our daily lives,” said Wubshit. “The beautiful link of quality academics and liberal arts in an engaging community helps students become academically more versatile, spiritually stronger, personally focused and more dedicated.”