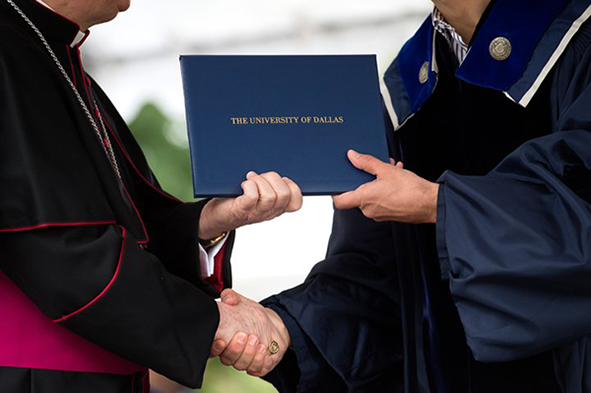 "UD strives to orient each of its students to truth and to cultivate in them wisdom and other virtues, a mission we fulfill through exceptional teaching, research and care for each of our students ... Tom and Meriem are recognized for their ingenuity, integrity and principled leadership, and so serve as outstanding examples of the education we provide."

The University of Dallas is pleased to welcome two notable alumni, Tom Nealon, MBA '88, and Miriem Bensalah-Chaqroun, MBA '86, who will address the Class of 2018 during the university's annual commencement exercises for the Constantin College of Liberal Arts, the Braniff Graduate School of Liberal Arts, the Ann & Joe O. Neuhoff School of Ministry and the Satish & Yasmin Gupta College of Business. The ceremony will begin at 9 a.m. on Sunday, May 13, on the Braniff Mall.

For their life and service to the principles of leadership, the University of Dallas will award each speaker with an honorary degree of Doctor of Humane Letters.

"UD strives to orient each of its students to truth and to cultivate in them wisdom and other virtues, a mission we fulfill through exceptional teaching, research and care for each of our students," said University of Dallas Provost Jonathan J. Sanford. "Tom and Meriem are recognized for their ingenuity, integrity and principled leadership, and so serve as outstanding examples of the education we provide."

An MBA alumnus of UD, Nealon currently serves as president at Southwest Airlines, where he is responsible for the commercial, finance, technology, corporate delivery and strategy and innovation departments. With more than 30 years of experience in business and technology spanning several industries, Nealon is a champion of long-range strategy, bringing enhanced focus to his innovation efforts.

In 2012, Nealon was elected to the CIO Hall of Fame, and in 2010, he received the MIT Sloan Award for Innovation Leadership. Recognized multiple times by InformationWeek as a "Premiere 100 CIO," Nealon served as a group executive vice president for JCPenney, as an executive vice president and CIO at Southwest Airlines, and as vice president and CIO at Frito-Lay Inc. He presently serves on the boards of directors of both Southwest Airlines and the Fossil Group, as well as on the boards of trustees of both the Catholic Foundation and the University of Dallas.

A leading businesswoman in the Kingdom of Morocco, Bensalah-Chaqroun holds her UD MBA in international management and finance, and was instrumental in helping arrange the university's partnership with Al Akhawayn University in Ifrane, Morocco. She is also an alumna of the École Supérieure de Commerce de Paris and University Paris IX in Dauphine, France, and currently serves as president of the Moroccan Confederation of Businesses and chief executive officer of Les Eaux Minérales d'Oulmès S.A., a leading Morocco-based company listed on the Stock Exchange of Casablanca, specializing in water and beverage distribution.

Bensalah-Chaqroun is deeply involved in humanitarian efforts at private and public agencies as well as in numerous charitable associations. She is also a trained aircraft pilot, Harley-Davidson motorcycle enthusiast and first-series golf player. In 1993, Bensalah-Chaqroun won the Rallye Aïcha des Gazelles du Maroc, a famous one-of-a-kind automobile competition restricted to women only, using simply old-fashioned navigation (compass and map) while trekking completely off-road through the sand dunes of the Sahara desert.