Our Kids at Heart

Our Kids at Heart: The Evangelizing Power of Catholic Education 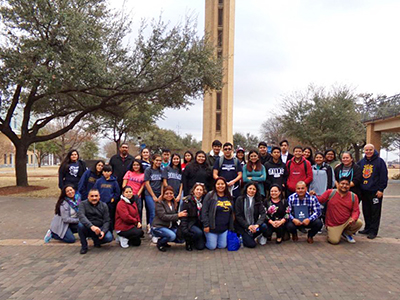 This is the promise Father Mark Hamlet, BA ’68 MBA ’70, makes to his congregation at every Mass. The pastor of Sacred Heart Catholic Church in Austin, Hamlet has spent much of his ministry advocating for Catholic school education through his nonprofit foundation, Our Kids at Heart.

When this University of Dallas alumnus graduated in 1968, he had no idea he would follow his alma mater’s mission of promoting Catholic education. On the contrary, not even the priesthood was on his mind. While he had considered the vocation before entering UD, he soon learned that God had other plans. After graduating, he married his wife, Cynthia (Convers), BA ’68, and together they had six children, five of whom also attended UD. Throughout their 37 years of marriage, they lived in Dallas, Little Rock, Caracas, Venezuela, Mexico City, Boston, Austin and Giddings, Texas, as Hamlet pursued a career in international marketing and sales of medical devices. Active and faithful members of the church throughout their marriage, Cynthia supported her husband as he was trained for the permanent diaconate for the Diocese of Austin and ordained in 1995.

But after Cynthia passed away from cancer in early 2007, Hamlet began to feel again the call to the priesthood tugging at his heart.

“Widower deacons cannot remarry, but I had already been married to a wonderful woman and companion. Marriage was not on my mind,” he said. “When a year had passed, I met with our bishop and asked him if I was too old. I was 62. Bishop Aymond told me he had been waiting for me.”

After studying at St. Mary’s Seminary in Houston as a transient deacon, Hamlet was ordained a priest in 2010 at the age of 64. In 2012, he was appointed pastor of Sacred Heart Catholic Church in Austin.

This newly ordained priest had his work cut out for him. A 90 percent Hispanic population of mostly undocumented immigrants, high drop-out rates in schools, children using drugs and alcohol and being challenged to declare gang colors as early as middle school, teenage mothers turning to Planned Parenthood for support, unmarried couples struggling to raise families — this was Hamlet’s new parish.

Yet at the root of these struggles Hamlet discerned one essential problem: a lack of Catholic school education in the community. While the parish had run a school at one point, it had closed in 2002. By 2012, only seven parish children attended Catholic schools. The rest attended local public schools, which seemed to provide an environment detrimental to forming the virtues necessary to combat the struggles of living in an impoverished neighborhood.

When Hamlet realized this, he began making a simple promise to his parish: If a child was accepted to a Catholic school, that child would attend Catholic school. “That was a difficult thing for our congregation to accept,” he said. “Gradually they began to respond, but it was a hard sell. Catholic school education is not familiar to these immigrants, who are often poorly educated themselves or even illiterate. Education is not something they generally value or pursue.”

Yet ultimately the greatest obstacle to Catholic education for these families was its unaffordability. Even if parents recognized the benefit of such an education in the faith, they knew that they simply could not pay the tuition bills. But as Hamlet continued to see their need for Catholic education, he established a nonprofit foundation, Our Kids at Heart, to provide the necessary assistance. The foundation now provides tuition support to more than 150 students from kindergarten to 12th grade, partnering with two Catholic schools local to the Austin area.

As the parish children began attending Catholic school, the benefits of such an education were greater than Hamlet had previously imagined. “In the beginning, I thought it was about the children,” he said. “Of course it helps the children, but I came to learn something that astounded me.”

Quite simply, when the children were educated in the faith and in moral virtue, it transformed their entire family. When the children came home from school every day sharing the Bible story they had learned that day or asking their parents to pray with them, they spread the joy and light of the faith. Upon seeing the evangelizing power of these little ones, Hamlet gave them a nickname: Pentecost Bombs.

And much like the event of Pentecost, the effects of their evangelization are dramatic: “The family no longer sees themselves on the bottom of the socioeconomic ladder,” said Hamlet. “A kind of dignity begins to appear with them. Parents begin to want to get married in the church so they can go to Holy Communion with their children. Catholic education is the greatest gift we can give to poor immigrants. With the Catholic education of their children, families grow in faith. Marriages often become stronger as the entire family is drawn into the mission. It’s not just about the children. The entire family is richer and stronger. Evangelization is real and transformative.”

As the program continued to grow and succeed over the years, the founding board members wondered if they might go beyond simple K-12 education, finding a way to connect to a Catholic university education as well. Hamlet turned to his alma mater for support, presenting the university leadership with his case. Together they initiated a Memorandum of Understanding to support these first-generation immigrant children heading for university degrees, helping the vibrant Pentecost Bombs to become future community leaders.

“The University of Dallas connection was an obvious solution,” said Hamlet. “UD has one of the finest educations in the Southwest United States, and it is more than superficially Catholic. Also, I attended UD and met my wife there. Five of our six children attended UD and participated in the Rome Program. I am a huge fan of the Catholic, classical liberal arts education offered by UD.”

Two of Hamlet’s parishioners, Hector Pinell and Raquel Martinez, are now students at UD. Without the help of Hamlet and the foundation, they would not be here today.

Pinell, a computer science major, said that he initially did not plan to go to Catholic high school, much less UD, but he transferred to the local Catholic high school after his freshman year, thanks to Hamlet’s encouragement. “I wasn’t really interested in the education, but I decided to try it out because of the work study program they had,” he said.

When the time came for Pinell to apply to colleges, Hamlet recommended UD. “He said many great things about the university, such as the Rome Program and how they are able to make you think,” said Pinell. After doing his own research and finding out about the 4+1 program in cybersecurity, he decided to follow Hamlet’s advice once again.

Although he admits that his high school self was not much interested in education, Pinell now sees things differently. He now plans to pursue a master’s degree in cybersecurity, hoping to later work for a private company or the government.

“UD helped me think about things more deeply and carefully,” he said. “Thanks to Catholic education, I am willing to help others in the future.”