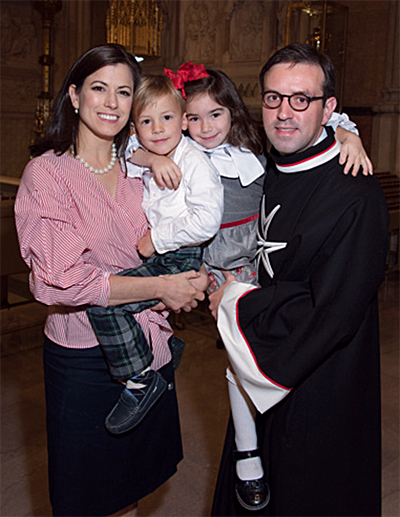 “The Order of Malta has an emphasis that is very ancient,” said Assistant Professor of Politics Gladden Pappin, who was invested in the order in November as a Knight of Magistral Grace. “There is a deep connection to the Catholic European heritage.”

The Sovereign Military Order of Malta is a Roman Catholic lay religious order and the oldest chivalric order still in existence, dating from the mid-11th century in Jerusalem; Pope Paschal II recognized its sovereignty in 1113. It was originally established as a hospital by the Knights Hospitaller — as the Knights of Malta were then known — to serve pilgrims to the Holy Land. The order’s founding is credited to the Blessed Gerard along with a group of monks. With approximately 70 professed religious at its heart, the order today consists of around 13,000 knights and dames, primarily lay members who have made a solemn commitment to uphold the motto and goals of the order, which include the defense of the faith and service of the poor.

As Pappin explained, the order has always exhibited an active spirituality that stresses the spiritual aspect of charitable service.

“Acts of charity are about sanctification,” he said. “Members of the Order of Malta join for this reason: to glorify God through the sanctification of their lives and the performance of spiritual and corporal acts of mercy. It is a religious order because the professed knights can take vows of obedience, poverty and chastity. As lay members, we focus on works of charity as well as the defense of the faith and all issues of life.”

After receiving both his bachelor’s degree and doctorate from Harvard, Pappin became involved with the order during a research fellowship at the University of Notre Dame, where he is a permanent fellow and senior adviser of the Center for Ethics and Culture; he met some members and began to cooperate with their works. He came to teach at UD this past fall, drawn here by the university’s distinctly Catholic identity and renown in political philosophy.

“Students here receive a very serious education,” he said. “Nobody winds up here accidentally; they know they’re going to learn something hard to find elsewhere.”

The Order of Malta has a significant presence in the Dallas area, with several dozen members here; the American Association is headquartered in New York.

The Order of Malta has a long and storied history in Europe; now based in Rome, it has full diplomatic relations with 107 countries and permanent observer status at the United Nations. Neutral and nonpolitical, the order can mediate in both civil and armed conflicts, intervening as a protective force.

“Any Catholic can become an auxiliary of the order, helping to carry out the corporal and spiritual works of the order,” said Pappin. “And like any religious order, it will invite people to consider deeper involvement.”

Aside from being a Knight of Malta, Pappin teaches courses on Aristotle and Machiavelli here at UD and is the deputy editor of American Affairs, a quarterly journal of public policy and political thought, which he co-founded with the editor, Julius Krein, at the beginning of 2017. With a worldwide print distribution and a focus on reconsiderations of contemporary political matters, the journal has been widely discussed in the media. Pappin’s own scholarship focuses on early modern political and ecclesiastical thought, the development of modern liberalism, and contemporary political questions. He is also a member of the Osage Nation.

Pappin enjoys traveling, especially in Europe and specifically to France; the Order of Malta actually leads a pilgrimage to Lourdes every year, during which thousands of knights and dames tend to the sick. He is the father of two young children, and his wife, Jeanette, is an artist.

“It’s a matter of spirituality and, in the case of the Order of Malta, one based in the noble tradition of protection and service,” said Pappin.

In the photos: Top: Pappin receives the insignia of the order from Jack Pohrer, president of the American Association, at St. Patrick's Cathedral, New York, on Nov. 3, 2017. Body of story:  (L-R) Jeanette, Clement (4), Marie-Thérèse (5), and Gladden Pappin.