‘A Tireless Servant of UD’ 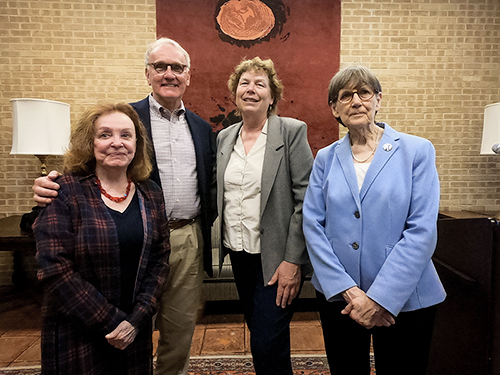 The Minnie Stevens Piper Foundation named the University of Dallas’ own Eileen Gregory, Ph.D., professor of English, as one of this year’s Piper Professors. The award, which honors 10 professors annually in Texas colleges and universities for their outstanding achievement in the teaching profession, is widely regarded as the most prestigious award of its kind in the state and is given alongside an honorarium.

“As it is, when I teach I do so in an educational climate that honors teaching above all things, and I work among you all who love your work fiercely, who see the engagement with students as a privilege,” said Gregory, addressing her fellow University of Dallas faculty members regarding her recent award at an afternoon reception on Friday, May 4.

“Thanks to all of you who have made this award possible, those on the nominating committee, those here who wrote supporting letters,” she continued. “Thanks especially to John Norris, who orchestrated the whole strenuous process of the application. And thanks to all of you, my colleagues and friends, for being here today.”

Professor of English Scott Crider first submitted Gregory’s nomination to the University of Dallas’ Piper Award Nomination Committee for consideration. “Eileen’s scholarship is of the highest order … She is a tireless servant of UD,” he wrote. “Personally, I find her an inspiration, a model of the innovative traditionalism some of us believe defines our university and a worthy heir to her teacher Louise Cowan — an earlier Piper recipient  — not because she merely followed Louise, but because she took what Louise taught her and made it her own, something new.”

Gregory has published numerous books and articles on lyric and contemporary poetry, most notably H.D. and Hellenism, a groundbreaking book on the modern American poet Hilda Doolittle (H.D.), in 1997 with Cambridge University Press. In her more-than-30-year tenure at the university, she has served as chair of the English Department on several occasions, as secretary and chair of the Faculty Senate and as the faculty adviser of Ramify, a literary journal of the Braniff Graduate School.

Reflecting on her work as a teacher, Gregory gave thanks to her fellow faculty and colleagues for their nominations and support. She recalled a poem that she fell in love with as an undergraduate by Richard Wilbur, titled “The Juggler”:

A ball will bounce, but less and less. It’s not

A light-hearted thing, resents its own resilience.

Falling is what it loves, and the earth falls

So in our hearts from brilliance, settles and is forgot.

It takes a juggler with five red balls

To shake our gravity up.

“The teacher is like that juggler: and her work is contra naturam, resisting the force of gravity,” said Gregory. “That’s what our teaching, and all our talk about the reflective life, boils down to — efforts to keep brilliance in our hearts, to remember the lightness that is native to our spirit.”