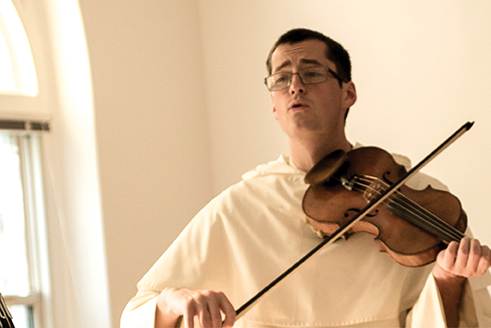 Growing up in a half-Irish Catholic family in Cincinnati, the seven Teller children knew a household full of music. Every year, their parents would host a huge party with music at its center; each child was required to first learn to play the piano, then could branch out to other instruments if they so chose.

“We aren’t classically trained,” explained Lucy Teller, BA ’19. “But we all love music. Our dad would play the piano and sing folk songs, then my brother started playing guitar.” Lucy was largely inspired to learn guitar herself by Taylor Swift, one of her favorite musicians; she got one of Swift’s songbooks when she was 13 and learned it all by heart.

Lucy has three older brothers who are all UD alumni, but two are also a different type of brother — specifically, Dominican friars. These two brothers, it just so happens, like Lucy have used the love of music instilled during childhood by their family to become musicians and produce music of their own.

The summer after his sophomore year at UD, Brother Simon (Will) Teller, BA ’13, and some friends traveled to the Blue Ridge Mountains of Asheville, North Carolina, with the simple intention of being street performers, which in this tourist town is a completely legitimate occupation. Originally the group was planning to focus on just juggling, but ultimately they began playing music as well; Brother Jonah (Micah) Teller, BA ’11, joined them when he happened to be passing through. Back at UD, Brother Simon and his friends formed the band the Stillwater Hobos and returned to Asheville three summers in a row; one summer, they made thousands of dollars simply juggling and playing music for tourists.

At UD, the culture centered largely around playing music in the Old Mill woods on Friday nights; once the Stillwater Hobos were formed, they also performed at events such as Battle of the Bands and Mallapalooza. Lucy sang onstage with them at one of these events. For her, it wasn’t just the music she enjoyed, but the actual performance. She herself has not ever been in a particular band at UD, but she has participated in Battle of the Bands every fall and Mallapalooza every spring; individual artists, she explained, come together to play.

Brother Jonah entered the Dominicans in 2013. During his novitiate (the first year), he began taking bluegrass guitar lessons from Rick Hayes, a local musician and luthier who also had a recording studio. Hayes also began teaching Lucy (then a senior in high school). After graduating from UD in December of 2013, Brother Simon moved home for several months before entering the seminary, spending that spring partly in Cincinnati working and partly in Asheville playing music with the Stillwater Hobos. Lucy and Brother Simon played music semi-frequently together at home. Ultimately, Hayes helped Lucy — while still in high school — record an album. 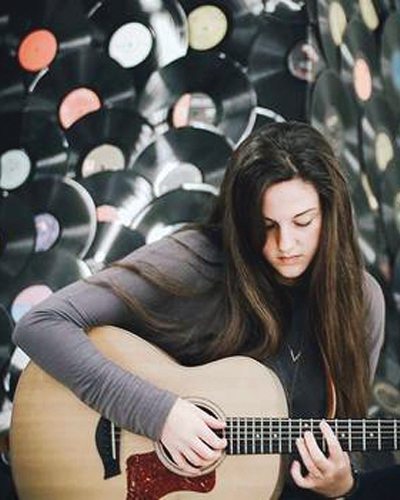 This E.P. featured one cover and the rest original songs composed by Lucy; though these particular songs bring back a lot of teenage angst for her, her love of songwriting has persisted, and she still writes frequently; similarly, when at home she spends as much time in the studio as she can. Her musical tastes have shifted and developed over the years in regard to both what she writes and what she listens to; her current favorite band is Dawes because they are skilled musicians who write beautiful lyrics, but she also writes and sings a lot more pop music than she used to; not unlike her brothers, her taste used to tend more toward folk and Americana.

“I’ve learned a lot about human interaction by listening to my favorite artists,” she said. “It’s good to hear perspectives from music; nothing is too little to write about. Music is a way to tell what I’m feeling, and every part of every day has to have some kind of music; every memory has a specific song attached — road trips, studying, moments with friends — it’s part of every second of our daily lives. Rick has been a huge mentor to me because we share this love.”

Upon entering the Dominicans, Brothers Simon and Jonah discovered a shared love, too, with the other friars of bluegrass and folk music.

“When we entered the order, we expected to give up a lot of things,” said Brother Jonah. “It was a delightful surprise, then, that music didn’t end up being one of them.”

“In college, music was very central to lasting, deep friendships; it was a real source of friendship and joy,” said Brother Simon. “The same is true in religious life. It’s a joy to play together; it draws us together as a community.”

As the brothers explained, music is for them an expression of fraternal life, but on a larger scale, it is a naturally unifying power.

“People want to sing together,” they said. “It’s a moving experience and an incarnation of unity in faith; we can extend an offer of faith through music. When we play in public, we can get past people’s defenses, slip in the back door. Words get in, subconsciously, and people become open to reflection.”

The bluegrass/folk music group the Teller brothers play in with eight other friars from the Dominican House of Studies in Washington, D.C., is “The Hillbilly Thomists” (the name referencing a quote from Flannery O’Connor in which she referred to herself as such). After its release by Dominicana Records, their self-titled album, “Hillbilly Thomists,” quickly became the No. 1 best-selling folk-music album on Amazon. Its 12 songs, which include bluegrass classics, folk standards and Scotch-Irish instrumentals, feature banjo, fiddle, guitar, washboard and the bodhrán, an Irish drum. There are well-known tracks such as “Leaning on the Everlasting Arms,” “What Wondrous Love Is This” and “Amazing Grace,” as well as some original compositions. You can find the album on Dominicanjournal.org, Amazon.com or iTunes, and proceeds support the Dominican student brothers in Washington, D.C.

“It depends on what’s practical, what’s best for the Order,” the Teller brothers explained. “Recording music takes a lot of time, and we’re also full-time students. We’ll take it one step at a time and see where the Lord takes us. We’re happy to follow whatever form conveying the Gospel might take, whatever doors the Lord opens.”

Lucy, meanwhile, will graduate from UD in May 2019, majoring in human and social sciences with an art history concentration. In trying to determine her subsequent path, she spoke with the professors in her department and was surprised when they urged her to pursue a career in music.

“Their thoughtfulness and support of my music was unexpected,” she said. “Pursuing a music career is my absolute dream; it’s not super easy, though, and you need several lucky breaks. But they recognized that I wouldn’t be as happy or content in life if I didn’t at least try.”

Her brothers, too, are very grateful for their time at UD. They love the school and the faculty.

“It was a huge part of my life, of forming me — in both my intellectual and cultural formation,” said Brother Jonah.