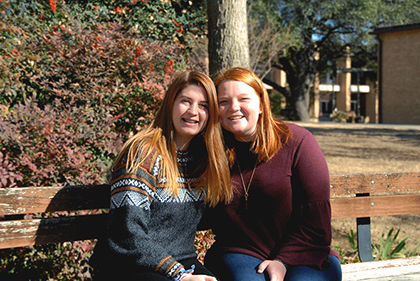 Once friends at John Paul II High School in Plano, Texas, Stephanie Lobo, BA ’18, and Rebecca Luna, BA ’19, can both remember the moments they set their horizons on transferring to the University of Dallas. Though their paths diverged briefly following high school, their friendship is now reunited on our university’s Irving campus.

In Lobo’s case, it was actually a matter of transferring back to UD.

“Before I came to the University of Dallas, I really wasn’t sure about coming here. I wanted to major in communication, and UD didn’t have a communication major,” said Lobo, who spent her freshman and sophomore years at UD before transferring to Texas A&M University.

“It’s a decision I thought about a lot; I prayed for so long,” she said. “I thought I needed to major in communication if I wanted to get a job; I wanted to be in a sorority and go to football games.”

Luna, on the other hand, relocated after high school to Omaha, Nebraska, studying for two years at Creighton University, until finding her way home to the Crusaders in Irving. “Once I decided to move back, I was immediately drawn to UD again, and I couldn't be happier,” said Luna.

As a high school senior, Lobo received a generous scholarship and financial aid package to attend UD, which left her conflicted: she still felt like her destiny might be better attained at another institution.

Luna, who was two years younger, was actually the one who provided a solution as they discussed Lobo’s dilemma on the steps of their high school: “Go to UD, take the Core curriculum and travel to Rome your first two years, then transfer to A&M. This way, you can have the best of both worlds.”

So that’s what Lobo did. She loved her UD experience, especially her Rome semester, but still believed she needed a communication major. So she transferred to Texas A&M.

“Everyone I talked with said they loved A&M, so I went, and it was really, really hard to transfer into such a big school,” said Lobo.

“I really had never experienced such a loving community like UD before, but I didn't realize what I had until I lost it and longed to have it back.”

During her time away from UD, Lobo’s experience didn’t quite live up to the hype she had anticipated, causing her to appreciate the community she had left behind in Irving. “I really had never experienced such a loving community like UD before, but I didn't realize what I had until I lost it and longed to have it back,” she said. “I just wanted to come back to the UD community that I’d had.”

Ultimately, she transferred back to UD after only studying in College Station for two semesters. She credits her friends at UD as well as the late Robert Yale (assistant professor of marketing), Amy Borja (assistant professor of Spanish), and University Provost and Professor of Philosophy Jonathan J. Sanford (then dean of Constantin College) with helping to guide her back home.

After her first semester at Texas A&M, Lobo heard UD had hired a new dean for the university’s undergraduate liberal arts college, Constantin College, so she called Sanford.

“Sure, UD didn’t have my major, but this didn’t matter as much to me now. I realized that there’s more out there than communication,” said Lobo.

This discovery, in fact, led to Lobo’s new career passion — social work — and her current major in human sciences at UD.

Meanwhile, as a senior in high school, Luna also second-guessed her first instinct to come to UD. She had solidified her faith as a camper at The Pines Catholic Camp outside Tyler, Texas, where she first met members of the UD community. “There is always a steady stream of UD and Holy Trinity Seminary students working as counselors each summer,” said Luna, who returned to The Pines after high school to work as a camp counselor herself.

“At first, I was certain I was going to attend UD for college,” said Luna. “But I began to freak out that I would be missing the ‘college’ experience at such a small school like UD, so I decided to go to a larger school in the Big East Conference.”

About halfway through her fall 2017 semester following her freshman and sophomore years at Creighton, however, Luna started reevaluating her decision to leave home. “A lot of things started happening at home that made it feel like the right time to make a change, and I am so, so happy I did,” she said.

As Luna readied herself for the move back to Texas, she narrowed her choices of colleges to just one school. “I love UD, because there are so many people who not only want to learn and have fun, but who actively practice their faith,” she said. “I couldn’t imagine going anywhere else: UD is home, and I’m so glad I stepped out of my comfort zone and moved across the country to find it.”

Now reunited, both Lobo and Luna are grateful to call UD home: they realized the only world either of them ultimately needed was in Irving among friends and family. “I definitely felt way more comfortable starting a new school knowing that I already had an incredible support system waiting for me at UD,” said Luna.

“A lot of people say you should graduate with a major designed for your career — but that’s just not true. Your bachelor’s does not define your career,” said Lobo. “You can have your own unique college experience. At UD, we are taught how to think. It’s about more than a degree; it’s about discovering truth and living life.”

Thinking back to her high school days and Luna’s advice to her, she added: “There are no two worlds; there’s only one world, and it can be found at UD.”