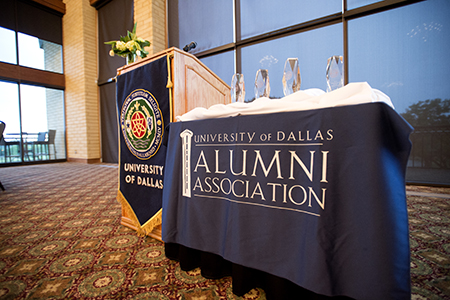 The University of Dallas has announced the recipients of the 2018 Distinguished Alumni Award - the highest honor the university can bestow on its alumni. They include Patrick Daly, BA '76 MBA '82, James Fougerousse, BA '67, Timothy Gehan, BA '82, Sister Theresa Khirallah, S.S.N.D., BA '70, Merrilee Salata Kralik, MPM '02, and Father Peter Verhalen, O. Cist, BA '77 MA '81. The Distinguished Alumni Award recognizes alumni who have demonstrated sustained and distinguished accomplishments and contributions to any field of human endeavor.

Award recipients will be honored during a reception and dinner Saturday, April 14, 2018, at the Omni Dallas Hotel. Ticket and table sponsorship details can be found at udallas.edu/DAA.

A beloved member of the UD community, Daly led many initiatives directed at improving the campus experience for students, including the pathway to the university's DART station; the renovation of Haggar University Center to improve the student dining experience; the improvement to the quality and safety of student housing through the construction of Clark Hall and renovation of Tower Village; the upgrading of academic facilities by the construction of SB Hall and Cardinal Farrell Hall; and the installation of campus gateways that welcome students, faculty and staff to the university.

Daly is especially known for his establishment of the campus' Cappuccino (Cap) Bar in 1981 with the assistance of Professor Emeritus of Art Lyle Novinski. Daly passed away on March 6, 2017, after a brief illness.

In 1970, UD asked Fougerousse to fly to Rome to investigate the possibility of using the Generalate House of the School Sisters of Notre Dame to accommodate students during their Rome semester. The trip was a success, and the now-famous Rome Program was born. Fougerousse served many other roles at the university, including assistant to the president, dean of students, adjunct professor of language and literature, and eventually the chairman of foreign languages and literature. In 1981, he became the director of the Rome Program, a role in which he served for eight years.

After leaving the university, Fougerousse became the dean and director of studies at the International Academy of Philosophy in the principality of Liechtenstein. While in that role, Fougerousse also found time to continue assisting the UD Rome Program and eventually helped secure the land on which the Eugene Constantin Campus now resides, in the locality of Due Santi, near the cities of Marino and Frattocchie.

Gehan is the founder and former CEO of Gehan Homes. Under his leadership, Gehan Homes grew to be one of the top 25 homebuilding companies in the U.S. and was closing an average of more than 1,400 homes per year. In addition, in his 25 years at Gehan Homes, he expanded the business from Dallas into several markets, including Houston, Austin, San Antonio and Phoenix, as well as managing $500 million in revenue per year.

After selling Gehan Homes in 2016, Gehan founded JTG Holdings. In his current position as president of JTG Holdings, Gehan focuses on residential and commercial real estate investments throughout North America. In addition to his bachelor's degree in economics from UD, he also has a law degree from Texas Tech University.

Sister Khirallah is currently the director of ministries for the Catholic Diocese of Dallas, where she oversees and collaborates with the diocesan ministry directors to provide support services to the parishes in all areas of ministry. Khirallah also works closely with the Dallas Diocesan Council of Catholic Women as their spiritual moderator. As a retreat and formation speaker, Khirallah works with various groups in the Diocese of Dallas for their events. She also works with the university's Ann & Joe O. Neuhoff School of Ministry to host the annual Dallas Ministry Conference. Most recently, Khirallah worked with Ted Whapham, Ph.D., dean of the Neuhoff School of Ministry, to begin a certificate program in pastoral ministry in cooperation with the Diocese of Dallas.

Khirallah's accomplishments also include founding the parish of Good Shepherd in Colleyville.

Kralik is a board-certified Catholic chaplain, the highest level of professional chaplaincy for laywomen acknowledged by the Roman Catholic Church. Now retired, she has served as staff chaplain at the University of Texas Southwestern/St. Paul Hospital and as on-call chaplain at Zale-Lipshy University Hospital, Presbyterian Hospital of Plano and Parkland Memorial Hospital. Kralik also spent 16 years as the lead facilitator for the Pastoral Care Training Series (formerly Ministry of Consolation) for the Diocese of Dallas. In that role, the team provided enhanced attentive listening skills training for professionals, parish staff, lay ministers and the ordained whose work and ministry involves meeting with people suffering grief, loss and bereavement.

Father Verhalen is the abbot of the Cistercian Monastery, Our Lady of Dallas, in Irving, a role to which he was originally elected in 2012 and re-elected for another six-year term in 2018. His election made him the first American to serve as abbot of Our Lady of Dallas. Ordained to the priesthood in 1981, Verhalen was headmaster of Cistercian Preparatory School from 1996 to 2012, where he also taught English, Latin and theology, and was form master for the classes of 1989, 1997 and 2003.