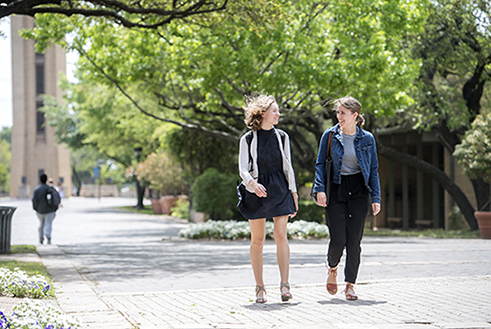 The University of Dallas was recently named, once again, a national College of Distinction among nearly 400 of America’s best liberal arts institutions. Adding to the university’s list of recent notable accolades, UD earned its placement in the 2019 edition of the “Fiske Guide to Colleges” — a comprehensive guidebook of the best colleges offering a superior education at an affordable cost — and ranked among the country’s “Best Catholic Colleges of 2018” by the ranking publisher College Consensus.

This marks the 11th consecutive year UD was named by the Fiske Guide among more than 300 of the “best and most interesting” colleges, and the ninth back-to-back year the university has been recognized by the “Colleges of Distinction Guidebook.”

“The University of Dallas has long been identified for offering a uniquely Catholic, liberal education in the classics of Western civilization,” said Interim President John G. Plotts, Ed.D. “We are honored that UD has continually garnered national recognition for its superior academics and quality community life from such reputable college guides and publishers. It’s a privilege to be named among the best institutions in our country.”

‘Philosopher Kings of the 21st Century’

The Fiske Guide hailed the University of Dallas as appealing to “those students who pride themselves on being the ‘philosopher kings of the 21st century,’ but whose roots go back to the Roman thinkers of an earlier era.” The annual college guide highlighted the university’s semester-long study abroad Rome Program, as well as its Roman Catholic affiliation and influence — and touted UD as “the best Roman Catholic college south of Washington, D.C.”

Compiled by former New York Times education editor Edward B. Fiske, the guidebook serves as a selective, subjective and systematic look at more than 300 colleges and universities in Canada, Great Britain and the United States. According to Fiske’s criteria, the selection of schools is based on academic strength, extracurricular activities and overall quality of student life.

In order to be designated a national College of Distinction, a school’s curriculum “must emphasize such core competencies as critical thinking, writing, oral skills, research and global perspectives.” According to the guidebook’s institutional profile of UD, “While pursuing their undergraduate degrees, University of Dallas students grow spiritually, intellectually, socially and creatively through various student organizations and activities.”

The academic distinction is presented annually to colleges and universities identified by educational professionals nationwide for exemplary commitment to engaged students, great teaching, a vibrant community and successful outcomes. The listing challenges traditional ranking models such as the popular U.S. News and World Report’s “Best Colleges,” which the organization claims favors “brand-name” institutions over those that offer a more well-rounded education.

According to its website, “By combining the results of all of the most reputable college ranking publishers and thousands of real student reviews from around the web, College Consensus provides the most accurate and comprehensive ranking of a school's reputation and quality available anywhere.”