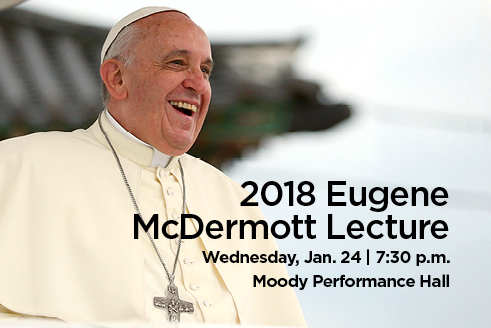 The University of Dallas is honored to bring together three of the most prominent voices in Catholic journalism in the United States for the 2018 Eugene McDermott Lectureship titled “The Papacy in the 21st Century: Where Are We, and Where Are We Going?” Ross Douthat (New York Times) and Austen Ivereigh (Crux), with John Allen Jr. (Crux) serving as moderator, will examine the modern papacy, situating Pope Francis’ pontificate in the context of recent papal history, the broader Catholic tradition and the future of Catholicism.

“The pope is one of the most prominent figures on the world stage, and his actions and concerns affect not only Catholics across the world but people of all faiths and nations,” said President Thomas W. Keefe. “UD is uniquely positioned to foster respectful and thoughtful dialogue on important questions about the Catholic faith in the contemporary world.”

All three journalists have published books on the pontificate of Pope Francis and will provide thoughtful and acute analysis of the many issues Pope Francis has tackled in his first years: immigration, the environment and climate change, interreligious dialogue, and justice for the poor, as well as specifically Catholic issues such as reform of the Vatican bureaucracy and the pastoral treatment of divorced and remarried people.

After serving as a senior editor at the Atlantic for more than a half-decade, Ross Douthat joined The New York Times as an op-ed columnist in April 2009. He is the author of “Bad Religion: How We Became a Nation of Heretics” (Simon and Schuster, 2012) and “Privilege: Harvard and the Education of the Ruling Class” (Hyperion, 2005), and also serves as a film critic for National Review.

As a British writer, journalist and commentator on Catholic and political affairs, Austen Ivereigh co-founded Catholic Voices, a project now in more than 20 countries worldwide. He authored “The Great Reformer: Francis and the Making of a Radical Pope” (Henry Holt/Picador 2014), as well as “How to Defend the Faith Without Raising Your Voice: Civil Responses to Catholic Hot-Button Issues” (Our Sunday Visitor, 2012 and 2015), and is also a contributing editor of Crux, the Catholic news site founded by Allen.

The London Tablet called John Allen Jr. “the most authoritative writer on Vatican affairs in the English language,” and renowned papal biographer George Weigel called him “the best Anglophone Vatican reporter ever.” As a former senior correspondent for the National Catholic Reporter and associate editor of the Boston Globe, Allen’s work is admired across ideological divides both in the United States and abroad. He is the senior Vatican analyst for CNN and founder and editor of Crux, an independent Catholic news site in partnership with the Knights of Columbus.

UD's Eugene McDermott Lecture Series was established in 1974 to honor the late scientist and civic leader Eugene McDermott. The event has featured prominent writers, artists, philosophers and educators including Mikhail Gorbachev, Mortimer Adler, Mark Helprin, Francis Fukuyama and others. The lecture is made possible by a gift from Margaret McDermott and is inspired by Louise S. Cowan, former University of Dallas English Department chairwoman, former dean of the university’s Braniff Graduate School of Liberal Arts and co-founder of the Dallas Institute of Humanities and Culture.