UD in the Community: Lamberti’s Carries On Tradition 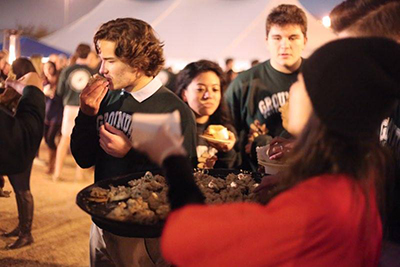 In the 62 years since its founding, UD has put down roots and grown into this shifting Irving soil in more ways than current students or far-flung alumni often realize: Irving is increasingly populated by alumni, faculty, staff and their families. In various Irving neighborhoods (and Irving is much bigger and more diverse than many students probably realize), in businesses, in schools, in churches, in other organizations throughout the city: there you will find UD. In “UD in the Community” stories, we explore these connections.

Lamberti’s Ristorante & Wine Bar in Las Colinas doesn’t serve “authentic” Italian food, per se. Instead, on their menu you’ll find Italian with a Texas twist, with recipes informed both by Lamberti family traditions and by ingredients that are grown and sourced locally. As a result, the flavor profile in Lamberti’s dishes, which are not exactly the same dishes you would find on a menu in Italy, similarly will be a little different from the food you would enjoy in a restaurant in Rome or Naples.

In fact, local is one of the restaurant’s three pillars; the others are famiglia and tradition.

“‘Local’ is Italian,” said Lamberti. “In Italy, the support of what’s local is what they’ve been doing for centuries. It’s about participating in what’s around you.”

What’s around Lamberti’s happens to include UD, so Lamberti’s was the vendor for this year’s Groundhog “Party in the Park” celebration; additionally, Lamberti’s is looking into carrying Due Santi Rosso wine from UD’s own vineyard on the Eugene Constantin Campus just outside of Rome.

This connection to UD helps to fulfill another Lamberti’s pillar: tradition. Groundhog, of course, is a UD tradition.

“It’s a unique opportunity to do these things, actualize these conversations — such as, what could Groundhog be? It could be an even bigger tradition; there’s no reason to be limited by what it has been or constrained by the past,” said Lamberti.

The restaurant also plans to participate in charitable events with UD and other organizations in the area.

“If you’re not integrated with the community, then what are you doing it for?” he asked. “If you’re trying to get rich, you should be doing something else.”

Lamberti’s, in a way, is itself a UD tradition as well.

In 1996, Lamberti, as an undergraduate at UD, needed some spending money, so he got a job waiting tables at i Fratelli in Las Colinas. He eventually began to take on management shifts, which was helpful because it was set money rather than just tips. After graduating from UD with a degree in French, he was accepted into a doctoral program in French literature at Boston College, but ultimately he moved to the East Coast for a couple of years and expanded his experience in the food and beverage service industry.

Irving remained home, though, and with a family to support and his own parents and siblings still here, it seemed like the time to move back — and he went back to work at i Fratelli, where he became the general manager.

It was a job he enjoyed and was good at, but he wasn’t completely satisfied with his career.

“I asked myself, what don’t I love? The answer was, well, I don’t love that it’s not mine,” he said.

With his family and friends, Lamberti began making plans to open a restaurant of their own. However, it turned out that i Fratelli wanted to shift their focus to their pizza venture and pay less attention to the traditional in-house dining experience, leading to Lamberti’s purchase of the restaurant in 2017.

Several other UD alumni and faculty invested in or helped broker the deal to transfer ownership to Lamberti and transform i Fratelli into Lamberti’s.

“A lot of UD people got together, saw the right thing and made it happen,” said Lamberti.

Lamberti’s is also the employer of at least half a dozen current UD students, who, like Lamberti himself once, have found waiting tables at Lamberti’s to be a job that works well with their priorities as students: they can work a few shifts a week, make $100 or so in tips each night and get a plate of pasta for dinner.

“There are certain things you don’t have to teach UD kids, even when they’re still trying to figure out their own lives,” he said. “They understand that it’s about service, about helping our guests have the best experience possible. It’s not about making money.”

This posture of service, in turn, helps them actually to make more money and has permeated the culture of the restaurant as a whole.

“It’s a heart of service,” said Lamberti. “Approaching it from that angle makes it more enjoyable.”

Lamberti’s is in some ways carrying on a tradition begun by i Fratelli, which was started and owned by four brothers and is largely about family. Lamberti’s latched on to this passion for the Italian people and culture, and their emphasis on famiglia.

“It’s not my place,” Lamberti said. “We respond to what the guests want; we aim to be the place for approachable Italian food and wine.”

Lamberti wants Lamberti’s to be accessible to the community; if someone wants to come in and spend $30 on a steak, they can certainly do that, but he also wants, for example, a family of four to be able to come in, each get a plate of pasta, leave a tip and still have spent only $40. Further, he wants the guy with the steak and the family to be able to sit at tables next to each other, with everyone having a great time. It’s not mutually exclusive; having one or the other doesn’t mean you can’t have both.

If you know of another Irving business, school, church or other organization that we should feature in a future edition of “UD in the Community,” please email Callie Ewing at cewing@udallas.edu.