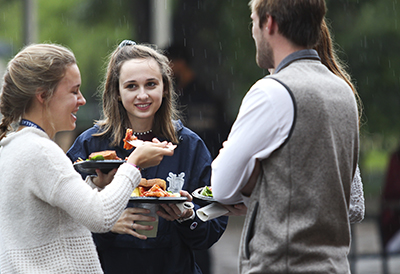 Torrential downpours greeted out-of-town guests visiting for Alumni and Family Weekend Oct. 11-14, but these steadfast travelers (as well as those of us who live here) persevered nonetheless. Braving drenched bounce houses, simultaneously struggling with both strollers and umbrellas, more than 600 alumni (families frequently in tow) and parents and siblings of current students made it out for various receptions, reunions and other events.

“Alumni and Family Weekend turned out to be a great success despite the rain,” said Director of Alumni Relations Larisa (Chavez) Thelen, BA ’13. “Thank you to all our faculty who opened nearly 50 classes to our alumni on Friday!”

“The campus is beautiful, and I felt cherished as an alum,” said Colleen Zarzecki, BA ’88. “Everyone was very nice to us. I had my daughters with me, and it was wonderful to see UD through their eyes. We had the wonderful opportunity to sit in on a Junior Poet class with Dr. Waterman Ward, who was very engaging and very welcoming to us. I was also able to introduce my daughters to Father Maguire, which was really important to me (predictably, they loved him).”

In addition to all-you-could-eat pasta under tents on the Mall Friday night and live music later in the Haggar Cafe, the Art Department hosted Open Studio Night with  M.F.A. and B.A. exhibits on display in various Haggerty Art Village locations, and the Haggerty Science Building observatory was open for stargazing through breaks in the clouds.

“It was so great to be back on campus with so many old familiar faces,” said Chelsea (Davis) Gibson, BA ’09. “I love what they’ve done with the weekend, and hearing from the interim president and provost at the State of UD Luncheon on Saturday was really encouraging and promising. I think the university is headed in a great direction.”

Finally, the Drama Department’s 50th anniversary celebration on Saturday afternoon and evening, hosted by Professors Emeritus/a Patrick and Judy Kelly, was a smashing success. This drama reunion saw the return of half a century’s worth of former drama students — both majors and those who worked on productions in various capacities. A slideshow featured scenes from all performances and inspired much reminiscing, as future drama students climbed on and off the stage in the Drama Building (which was rebuilt in 2016 and hadn’t yet been seen by many of the revelers), stomping and dodging through legs and very nearly tripping up caterers with snack-laden trays. The rain had let up by this point, so the erstwhile thespians and their families were able to socialize outside the building as well.

Class reunions on Saturday night had to relocate to the Haggar Cafe due to the wet conditions prevailing in the original outdoor locations, but this did not seem to spoil the fun for anybody.

“It was wonderful to see old friends in person again,” said Zarzecki, who attended her 30-year reunion. “Our class is pretty cohesive and in touch throughout the year, especially on Facebook, but it was really nice to be able to spend face-to-face time with them.”