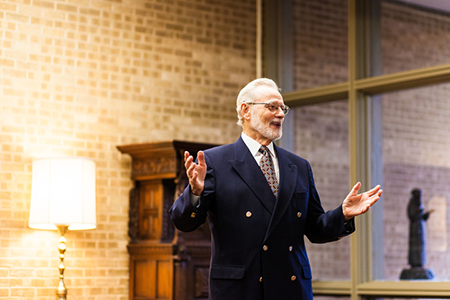 UD is proud to announce that Professor of Philosophy Robert (Bob) Wood, Ph.D., was named the 2018 Aquinas Medalist on behalf of the American Catholic Philosophical Association (ACPA). On Saturday, Nov. 10, in San Diego, the ACPA awarded its highest honor, the Aquinas Medal, to Wood in view of his exemplary philosophical work in and out of the classroom.

Though health issues prevented Wood from attending the formal award ceremony, his son Greg was on hand to receive the medal on his father's behalf, and Wood’s good friend Patrick Byrne of Boston College read his address. 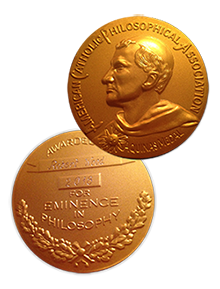 "Bob Wood is a wonder. In his teaching and in his writing, he leads us into the heart of reality, calling attention to the correspondence of that reality with our own deepest depths,” said Associate Professor of Philosophy Chad Engelland, Ph.D. “His thought is complex because it is true, challenging because it is good, and inspiring because it is beautiful. The Aquinas Medal is an honor he richly deserves."