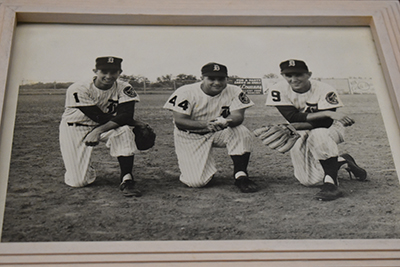 When he began his career at UD, which was at the time a brand-new university, Al Ogletree built his ballfield out of a cow pasture in the Trinity River bottoms. The outfield, which remained an attraction for grazing cattle, was riddled with cracks that made bouncing fly balls unpredictable; the infield was a minefield of rocks, cracks and crawdad holes. Ogletree, however, calmly carried on, teaching his boys about leadership as well as about the game they played. 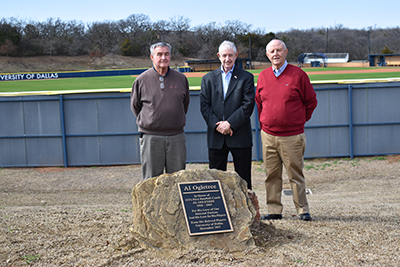 He was an exemplary coach (upon his retirement, in fact, the winningest coach in U.S. college baseball history), but his former players remember him best for his kindness.

“He was the most competitive individual, but also the most gentle,” said Troy Miller, BA ’64, who captained Ogletree’s team as an upperclassman. “The worst thing I ever heard him say was ‘Aw, shucks.’”

Ogletree and his wife were not much older than Miller and his wife, who married and started their family as students. The Millers’ oldest son was born their second year, and Miller recalled how his wife would bring their son to the games, where she would sit with Ogletree’s wife and their children.

“There was a natural bond between the families,” said Miller, who himself went on to become a coach as well, both of baseball and of football, and would sometimes see Ogletree when Ogletree was in Dallas recruiting for the University of Texas Pan American, where he finished his career.

This image of Ogletree exemplifies his character: a family man who loved the game he coached but never raised his voice to his players.

“He was a great coach, but also a great individual,” said Miller. “As a man, you wanted to be like him; he had all the characteristics a person would desire. And if you ever had a son who played baseball, you would want Al Ogletree to coach him.”

Gary Morris, who played for Ogletree from 1961-64, recalled making a critical mistake in a game his freshman year. Walking past Ogletree back to the dugout, he felt sure he would be sternly reprimanded, probably yelled at. But all Ogletree said was, “Next time, you’ll know better.”

Later, Morris asked Ogletree why he hadn’t been harder on him; Ogletree explained that if he had embarrassed Morris, it would have been a hit to Morris’ confidence that would have taken several games to recover from. This made a deep impression on Morris. Years later, in Vietnam, Morris’ radioman froze up in a fit of panic that put their unit in danger. Afterward, rather than yelling at him, Morris remembered Ogletree and said simply, “Next time, you’ll know better.” Not long after, in an act of extreme courage, that same radioman saved Morris’ life.

According to Morris, Ogletree’s philosophy is very well summed up in this quote from legendary college football coach Bear Bryant: “Sure, winning the game is important, and I would be the last to say it wasn't. But helping the boy to develop poise and confidence, pride in himself and his undertakings, teaching him to give that little extra effort are the real objectives of teaching winning football. And if I had a choice of either winning the game or winning the faith of the boy, I would choose the latter. For there is no greater reward for a coach than to see his players achieve their goals in life and to know he had a small part in the success of the boy's endeavors.”

“Coach Ogletree was a remarkably kind man,” said Morris. “I’m proud to have played for him in his maiden years at UD. He was a great leader, and he made UD proud.”

After six years of coaching baseball and basketball at UD and beginning the intercollegiate athletics program here, Ogletree went on to coach at Sul Ross State University and finally at the University of Texas Pan American. He has been inducted into nine halls of fame, including UD’s in 1998; the most prestigious of these is the Texas Sports Hall of Fame. While at UD, he won 91 baseball games; his career total is 1,187.

During Ogletree’s time at UD, when the enrollment of the university was still less than 600, the team was dubbed by one newspaper as “David” from the story of “David and Goliath” due to their many triumphs over teams from larger, older schools. Several players from those years of Ogletree’s regime have also been inducted into UD’s Athletics Hall of Fame. One of Ogletree’s players became an All-American, another signed a pro contract, and yet another set an annual National Association of Intercollegiate Athletics stolen-base record. Further, the tradition begun by Ogletree of an athletics program that produced strong athletes while always putting academics first eventually led to UD’s inclusion in the National Collegiate Athletic Association’s (NCAA) Division III.

As Ogletree nears the end of his life, his former players from his early years coaching in a cow pasture at UD have come together to make a tribute to him in the form of a plaque and dedication at the baseball field — in which you will no longer find crawdads, cow patties or grazing cattle. On the afternoon of Sunday, Feb. 25, 2018, they gathered to recognize and remember this man who taught them as much about life as he did about baseball. The plaque, which honors Ogletree’s contribution to the baseball program, is located beyond the centerfield wall where fans can walk past when they arrive to watch games this spring.

“This is a fitting memorial for him,” said Miller. “He brought so much to this university — quality as a coach and integrity as a human being.”