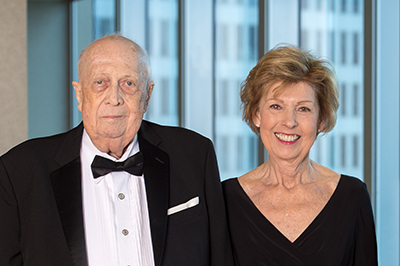 Steve T. Landregan, MA ’73, a longtime generous benefactor of the University of Dallas, passed away on Nov. 25. Landregan was fond of remarking that his earliest memories of being on the UD campus date from the years he would camp with his Boy Scout troop on the hill that is now the university’s home.

Landregan was one of the first at UD to earn a Master of Arts in Religious Education (now the Master of Catechetical Ministry) in 1973. Later, he went on to teach for the university in the Theology Department and in the Neuhoff School of Ministry. Embodying the university's dedication to the pursuit of wisdom, truth and virtue, Landregan lived out our commitment to the "renewal of Catholic theology in fidelity to the church and in constructive dialogue with the modern world." To honor his contributions to the university and to the broader church, the Landregan Lecture was established in 1999 and has hosted such prominent church leaders and scholars to campus as John Allen Jr., Bishop Robert Barren, Gustavo Guitierrez, O.P.,  and Joseph A. Fitmeyer, those whose areas of expertise reflect the many interests that animated Landregan throughout his long and distinguished career of service to the Catholic Church in North Texas as archivist, author and editor of the Texas Catholic.

Landregan and his wife, Barbara, MPM ’03, were recognized by UD’s National Alumni Board with the Distinguished Alumni Award in 2017 for their commitment to the founding and development of the Ann & Joe O. Neuhoff School of Ministry, their support of the Landregan Lecture Series and their more than 85 combined years of service to the Catholic Diocese of Dallas.

After serving in the military during the Korean war, Landregan settled in Dallas and began his work in public relations and journalism. It was in this capacity that Landregan was present at Parkland Hospital and was among the first hospital officials to address the media after President John F. Kennedy's assassination. Landregan served as editor of the Texas Catholic from 1966 to 1978 and then in various other capacities at the Diocese of Dallas over his 50-year professional career in the Catholic Church. In recognition of his service, Pope St. John Paul II awarded him the papal medal Pro Ecclesiae et Pontifice, the highest honor given to a Catholic lay person, in 1997.

A Scripture service will be held Nov. 29 at 7 p.m. at UD’s Church of the Incarnation, and a Mass of Christian Burial will be celebrated Nov. 30 at 10 a.m. also at the Church of the Incarnation. Former University President Msgr. Milam Joseph will be officiant at both services, and the funeral service will be immediately followed by a reception in SB Hall. (Parking lots C and F will be reserved for funeral guests beginning Thursday evening through Friday afternoon.) Interment will be in Sacred Heart Cemetery in Rowlett, Texas.

In lieu of flowers, donations are requested to the Landregan Lecture Series and can be made online at udallas.edu/landregan-endowment or by mail to the Office of Development and University Relations.