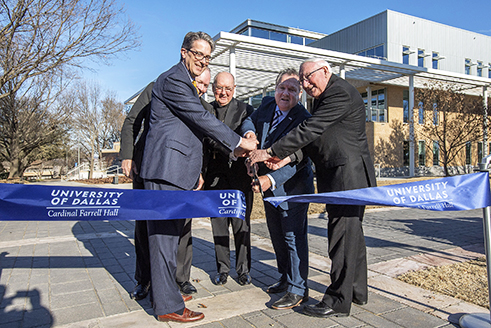 “Today marks a momentous occasion as we stand at the entrance of our new building named after our former bishop of Dallas, previous chancellor and longtime friend of the University of Dallas, Kevin Cardinal Farrell,” said President Thomas W. Keefe during the formal blessing and opening of Cardinal Farrell Hall on Friday, Feb. 2, 2018.

Standing beside the campus’s Braniff Memorial Tower and emerging from the deep roots of tradition in the way that it reflects the serious academic endeavors that we undertake here, the new student-focused building marks the completion of one of several capital projects, a part of a broader institutional effort to transform the university’s Irving campus.

“This building behind me is a real and tangible manifestation of the important work we do at the University of Dallas. It is also a tool that will be used to shape and mold generations of students who learn in its classrooms (or on its steps), the faculty who teach them and the staff who serve them through its offices.
— President Thomas W. Keefe

“In the way that Cardinal Farrell was summoned to Rome this past year for his new mission in the church as Prefect of the Dicastery for the Laity, Family and Life, this building marks a stage in our growth as a university,” Keefe continued. Cardinal Farrell, who played a significant role in this recent growth and revitalization of North Texas' only Catholic university, served as university chancellor from 2007 until his departure for the Vatican in 2016.

“The reason this building is now named for Cardinal Farrell is not just because we recognize his contribution, but because his vision for the university should be what people know and embrace when they come here and consider attending the University of Dallas,” said Keefe. “Our celebration, however, is not focused merely on the completion of a building — nor even a series of building projects. Winston Churchill said, ‘We shape our buildings; thereafter they shape us.’

“This building behind me is a real and tangible manifestation of the important work we do at the University of Dallas,” he said. “It is also a tool that will be used to shape and mold generations of students who learn in its classrooms (or on its steps), the faculty who teach them and the staff who serve them through its offices.”

Indeed, the university has come a long way since its founding in 1956 on a 1,000-acre tract of rolling hills in Irving, when Tom Braniff Drive and Northgate Drive were still gravel-paved roads. “The University of Dallas is considered to be one of the greatest Catholic universities in the United States; in fact, Forbes magazine considers it one of the top 15 Catholic universities in the United States,” said Cardinal Farrell at Friday’s dedication. 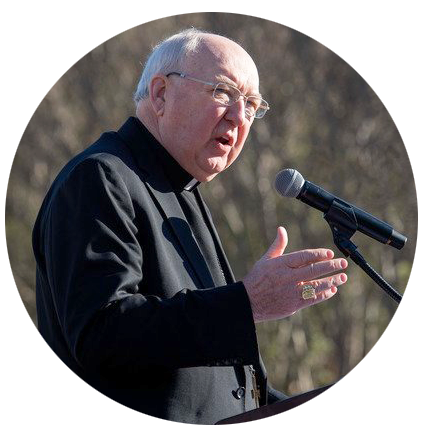 “From the very first day that I arrived in Dallas, I have always had a profound interest in the University of Dallas, in helping the university achieve its God-given potential, because it does have potential —  and we need to guarantee that we arrive at the fullness of that potential,” Cardinal Farrell continued. He went on to tell the story of the university’s origination and of traditions yet to come, including his recollection of the university’s first chancellor, Bishop Thomas K. Gorman, and Gorman’s pursuit of an authentic Catholic education:

“As you all know, the first incarnation of the University of Dallas dates back to 1910 under the direction of the Vincentian fathers; however, it was not until 1956 that the university as we know it came to life under Bishop Gorman ... he saw the need for an enthusiastically Catholic university to serve the future ... he understood the need and importance of educating Catholic laity who could engage with present-day culture ... he saw the need to have Catholics involved in every aspect of human life. Today, this is by far one of the greatest needs of our church: to have people prepared to act on behalf of Jesus Christ in our world today….