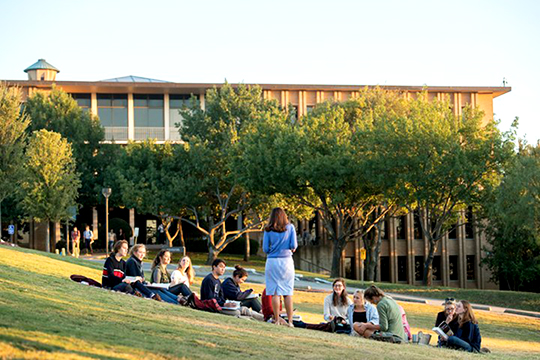 As University of Dallas students flourish under the guidance of our faculty, so too does the national reputation of the university.

Once again earning its placement among the country's best higher education institutions, the University of Dallas recently received high marks of excellence in the 2019 edition of The Princeton Review's popular guidebook "The Best 384 Colleges" and the annual listing of "America's Top Colleges" by Forbes magazine. The university was also recently named by Money magazine one of the "Best Colleges for Your Money."

"University of Dallas students are uniquely motivated to pursue a broad, liberal arts education, learning from the classics of Western civilization in the Catholic tradition, helping to prepare them to assume a wide variety of leadership roles in society," said Interim President John G. Plotts, Ed.D. "We are honored to receive such notable distinctions from each of these publications, recognizing us once again among the country's premier academic institutions."

UD is consistently ranked in Forbes' annual listing of "America's Top Colleges," which just released in mid-August, and is based on postgraduate success, student debt, student satisfaction, graduation rate and academic success. The 2018 listing ranks the university No. 253 out of 650 of America's top institutions, earning the university:

Considered among the best institutions at which to receive an undergraduate education - and identified as one of 129 "Best Western" regional institutions - the popular college guidebook commended UD with several other notable distinctions:

In early August, Money magazine declared UD among "more than 700 of the nation's best-performing colleges" in its 2018-2019 ranking of the "Best Colleges for Your Money." The personal finance publication (issued by Time Inc.) gathered its list of America's Best Colleges by evaluating three key factors: 1) the quality of a school's education, 2) affordability and 3) student outcomes.