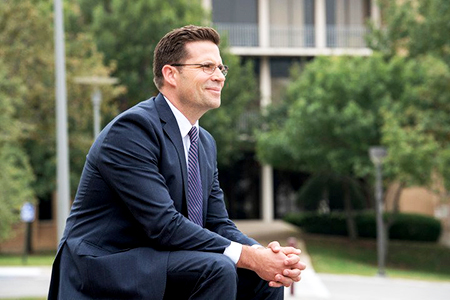 “This distinctive moment in the university’s history required that we carefully consider every option available to us. After nearly a year-long national search for an outstanding professional to lead the University of Dallas academic enterprise, it became clear that the best candidate available was on our Irving campus all along,” said Keefe of the appointment.

"I am humbled by this appointment and grateful to President Keefe and the board of trustees,” said University Provost and Professor of Philosophy Jonathan J. Sanford. “The University of Dallas, with its celebrated commitment to excellence in liberal education and professional programs, and its world-class faculty, fosters in its students those virtues by which they truly become salt and light for the world. I aim to strengthen and build on that excellence."

Sanford has served on and chaired a number of university committees, and his commitment to the Catholic intellectual tradition has been evident throughout his decades-long career in higher education. He has been extensively published and cited for his expertise on topics centered around ethics, virtue theory, metaphysics, and ancient and medieval philosophers such as Aristotle and Aquinas.

In his recommendation to university trustees, Keefe noted, “Dr. Sanford is known to all of us as a capable and thoughtful academic leader of high integrity who is committed to the Catholic intellectual tradition. Dr. Sanford has been a passionate supporter of the mission, vision and values of the university as dean, and I look forward to his contributions to the broader university community as provost.”

Keefe also announced that Sally Hicks, currently department chair and professor of physics, will step into the role as dean of Constantin College.

“Dr. Hicks is highly regarded for her research and teaching by her peers both at the University of Dallas and nationally,” said Keefe. “I look forward to the introduction of her strong voice to the academic leadership team.”